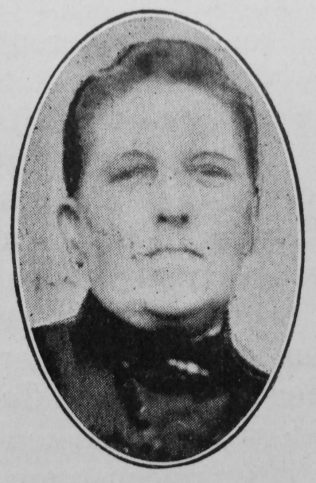 Blackpool Circuit, during the last few years, has lost a large number of useful and devoted men and women, and not the least missed amongst these is the subject of the present brief sketch. She was born at Blackburn, September 19th, 1848, and was the sister of Mrs. Joseph Cort, one of our oldest surviving local preachers in that town. From a very early age she belonged to the Sunday School and Church at Montague Street, and was one of the most earnest workers. Her first husband was Mr. Isaiah Haydock, local preacher and society steward, and son of the venerable Roger Haydock, the colporteur, so well known in Lancashire, and to whom a memorial window was placed in the Montague Street Church a year or two ago.

Two years after the death of her first husband she became united to Mr. Thomas Wareing, then of Liverpool, and one of the first scholars at our old Maguire Street Sunday School. After five years in Liverpool, always well reported of in connection with the Boundary Street Church there, she returned to Blackburn, and thence with her husband removed to Blackpool some sixteen years ago. Mr. Wareing is one of the trustees of our Chapel Street Church, and his wife was for long one of our most valued and self-sacrificing workers. She was always eager in planning and toiling for the material and spiritual interests of the place, and though latterly subject to much suffering and weakness continued unabated in her loyalty and devotion. Her patience during an illness of many trying vicissitudes was most remarkable. Her religious life was deep and strong. She died in faith and hope on July 25th, 1907, and was laid to rest at Blackburn, Rev. F.N. Shimmin and the writer taking part in the service. A more faithful daughter of our church never breathed.

Jane worked throughout her life. before her first marriage she was a milliner and dressmaker. In 1881 she is described as a confectioner and after moving to Blackpool, she was a lodging housekeeper.