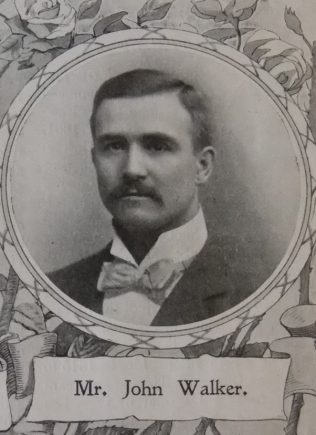 The subject of this sketch is a product of the Primitive Methodist Sunday School. He came to London from Yorkshire when fifteen years of age, having been a Sunday School teacher for two years. He soon allied himself with our Society at Kennington Park and has been a vigorous and steady worker with us ever since.

For the last twenty years he has been leader of our Bible Class. About twelve years ago he originated a C.E. Society which has today an average of over twenty; also for the last twenty years he has conducted our Band of Hope and has proved a painstaking class-leader. He takes a keen and active interest in local preaching on his own circuit, he is also closely identified with the S.L.L.P. Association.

He has proved a conscientious steward for this station for about fifteen years and retains the high respect of all our officials.

John was born about 1864 in Batley, Yorkshire, to parents Benjamin and Mary. Benjamin was a carrier. John moved to London to work as a clerk in the G.P.O. The 1911 census describes him as a Civil Servant, 2nd Division, Higher Grade, in the General Post Office.