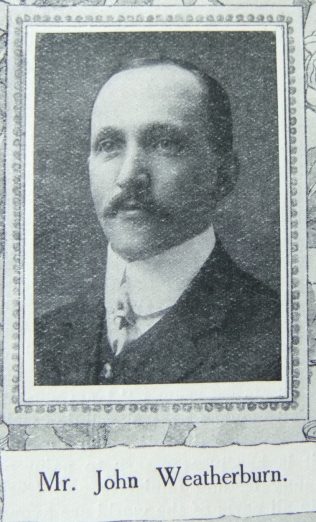 The Huddersfield Circuit Steward believes in a forward policy. He is one of a number of young men who belonged to the large Bible Class Mr. J. W. Glendinning taught. As a result of his gifted labours to train these young men for Christian service, we are fortunate as a Church in having many in active work as Sunday School teachers and local preachers. Our Circuit Chancellor comes of a good P.M. family, who helped to establish our Church in Huddersfield. He seems to have inherited his good mother’s spirit of charity and generosity to the Church, and is a real earnest worker, a devoted Sunday School teacher, acceptable local preacher, most regular in attendance at public worship, and is to the front in every enterprise for the welfare of the Circuit. By sane judgement, tact and wisdom we believe our brother will help the Huddersfield Circuit to rise and prosper.

The subject of this sketch was probably John Brook Weatherburn, born abt 1876 at Huddersfield, Yorkshire, to parents Hardy and Ellen Eliza. Hardy was a hay and straw dealer and a pawnbroker.

Baptism records for his children identify John as a pawnbroker.

John died on 5 May 1953 at Huddersfield, Yorkshire.