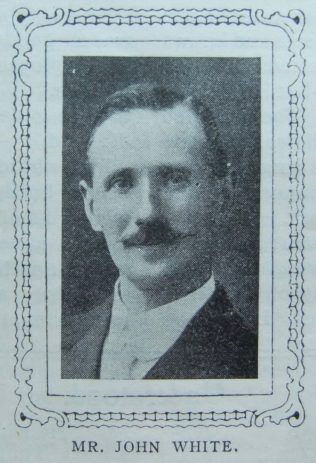 In Mr. John White our Paisley Church has a loyal and earnest Society steward. Since 1888 he has been one of those who have held this outpost of Primitive Methodism in the far north. Overshadowed as our church is here by the Presbyterian churches, it has been able to win an honourable position and make its own contribution to the religious life of the town only by the chivalrous loyalty of many of its members.

Educated a Presbyterian, Mr. White has found in the Methodist Church a congenial warmth of atmosphere and a suitable sphere of service. His daily duty is taxing. Up and down the tall “lands” of this grey town he carries the postman’s bag. But, after climbing stairs all day long, few are more ready than he to devote his leisure to his church.

His work as Society Steward is well done, but it does not exhaust his services. He has played and does play many parts in church life. For twenty years he taught in the Sunday school. When the C.E. movement touched Scotland he was one of the first active members. An active member he has remained until to-day. He is still the Convenor of its Prayer Meeting Committee. He was amongst the founders of the local C.E. Union. In this land of pastorates a local preacher’s duties are not so laborious as elsewhere, and he has found time to serve in that capacity also. When an attempt was made to found a new church at Elderslie he willingly shared with others the burden of that work. His fellow postal employees have recognised his aptitude by electing him as the local Secretary to the Postal Telegraph and Telephone Christian Association. He is a good representative of the men who have been our strength in Scotland.

I have been unable to identify John in census returns. Can anyone point me in the right direction?