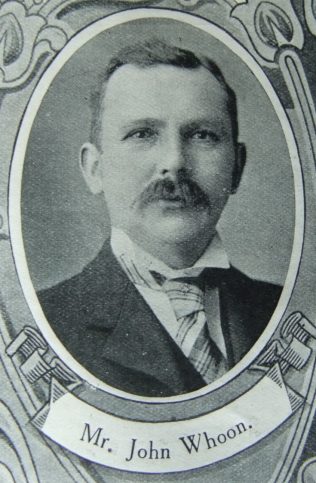 Mr. John Whoon was born at Pool, in the Parish of Illogen, near Redruth, in the County of Cornwall, in the year 1851. As a young man he removed to Chacewater, and was converted there under the ministry of Rev. W. Albert, in the year 1883. With characteristic steadiness and energy, he threw himself into the work of the Church, and was soon in charge of an important class, and an acceptable local preacher. As a preacher, he combines Saxon shrewdness with Celtic fire. Beneath a calm and cautious exterior is hidden a wealth of emotion, which throbs in the measured speech of his pulpit utterances, and gives unction to his work. For twelve years he has been Steward of the St. Day Circuit, and in this capacity his prudent and faithful management of the finances of the Circuit has gained him the fullest confidence of his brethren.

John was born on 7 July 1850 at Pool, Cornwall, to parents John and Mary Ann. John, senior, was a farm labourer.

John worked on the railway for most of his life. In February 1876 he became a porter at Scorrier.  He transferred to Chacewater in June 1885 and became a signalman in March 1889. Before working on the railway he worked the land.

John served as Sunday School superintendent, society steward and chapel secretary in addition to the offices identified in the sketch above.

Note: In earlier records the surname is written as Woon.