A Valiant of the Lay Ministry 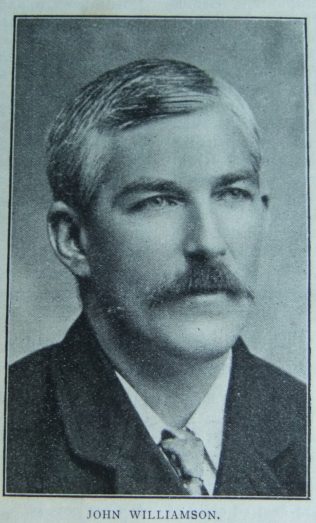 Transcription of ‘Sketch’ In the Christian Messenger by Robert Walton

MR. JOHN WILLIAMSON of Brandon Colliery, is a person whose friendship will greatly enrich those who receive it. He is only a coal miner; but that must not be regarded as a disparagement, but rather as enhancing his worth, because it is well known that the conditions of mining life are not conducive to study and the making of beautiful character. A man must be of strong will and self-respect to break away from the customs, habits, and tastes so prevalent amongst miners; and, indeed, the probabilities are that he would fail, were it not for the gospel of Jesus Christ.

Brother Williamson stands out from among the miners with a personality so strong and praiseworthy that he has thoroughly won their respect and affection, and very little quarter would be given to the person who attempted to speak ill of him.

He was born at Brandon Colliery in 1864, but in early boyhood he removed with his parents to Billy Row in the Crook Circuit. Here he attended the Sunday school, and under the faithful teaching of Adam Suddick, who has passed “within the veil,” George Fairless and Henry Green, who are still in active and devoted service, he received his first religious impressions. He has the most sacred feelings and happy thoughts of these men, and his talk about them is of the most enthusiastic nature. But those religious impressions remained as undeclared for some years. They were like the bread cast upon the waters which was found after many days, for it was not until he was twenty years of age that he was converted.

Previous to that he had acquired a great love of reading. He had got hold of Cowper’s “Task,” and when he read it he was filled with a new inspiration; it opened a new world to him, and as it appeared so attractive and satisfying he determined to enter. He found it to be larger and better than he anticipated; its paths were unending, its fields innumerable, its riches inexhaustible; and although he had many rare experiences he never tired nor felt surfeited, but was more inclined to travel on to know all that he could. That feeling is still with him. All his spare time is spent in reading and meditating, and his store of knowledge is marvellous. He has not confined his attention to one subject; he is in the strictest sense “a well-read man,” although his favourite themes are poetry and nature. How his eyes sparkle, and his countenance brightens when he lays his hands upon a book of poetry or nature that he has not read. He handles it as he would a treasure, indeed it is a treasure, for to him nothing is so valuable as knowledge.

This love of reading at once decided the officials, after his conversion, to make a local preacher of him. As soon as the year was up, his name was placed upon the plan as an exhorter. His examinations were satisfactory, as also was his trial sermon; but as he returned to Brandon, then in the Spennymoor Circuit, a short time after preaching it, he was put on full plan there. He soon fell thoroughly in love with preaching, so that “preaching has ever been his joy and delight,” and he has “always endeavoured to make all things helpful to the pulpit,” believing “that it is worthy of the best.” Poetry, biography, nature, incidents in life, provide him with illustrations to enforce and make clear the truths he wishes to teach.

Fond of scenery, he has visited many of the beautiful districts of the country, but no place has such fascination for him as Scotland. Its people, its hills, its songs, its history, etc., have a charm over him that sends him into ecstasy when they are mentioned. This may be because his ancestors on his mother’s side hailed from the Scottish borders, and have bequeathed to him some of their Scottish blood. He has spent many happy holidays there, and always returns home with increased knowledge and love, a parcel of books, and the determination to visit it again.

His love for Scotland shows itself in his highly interesting and instructive lectures: “Scotland and Scotsmen,” “Scottish Song and Scenery,” “ Burns; His Inspiration, Genius and Mission.” Other lectures of his are: “Man and Nature as Sung by the Poets,” “Hymns: Their Authors and In?uence,” “Sketches of Methodist Life and Character.”

Although only a coal miner, it must not be supposed he has not had an opportunity for something better. Some time ago he was induced to accept an official position in the mine, but he never took kindly to it. It did not allow him sufficient time for reading, and interfered with his preaching and work for the church. Some men would have said, “It is a pity, but it cannot be helped. I must do the best I can for myself and family. I will therefore request Quarterly Meeting to give me fewer appointments, and I must be relieved of some of the work I am doing for the church.

Not so with Williamson. He said: “The official position must be given up,” and he gave it up. He has gone on with his preaching, and gladly takes all his appointments, and when he is planned, a good company always turns up to hear him. His services are in great demand by other Circuits besides his own in fact, he could be engaged every Sunday away from home if he would consent. Thoroughly evangelical and deeply spiritual, his sermons have a freshness and literary finish that make him much sought after.

His interest in and consideration for young life are very pronounced. Regularly he goes to the Christian Endeavour on Wednesday nights, and, when able, he takes his share of work in the Sunday school. His large store of information makes him an instructive and useful member. Neglected appointments can be suitably filled if he is present.

He is loyal to his church, greatly respects his ministers, to whom he says he is greatly indebted for the loan of books, etc., and he delights in seeing God’s work revive. There ought to be many years of service for him, which God grant, as there is need of men like him.

John was born in 1864 at Brandon, Co. Durham, to parents Hugh and Jane. Hugh was a coal miner.

John worked as a coal miner, but the 1911 census return describes him as deputy overman.

John died on 19 November 1922 at Esh Winning, Co. Durham. He died shortly after preaching at the morning service at Esh Winning PM Chapel.