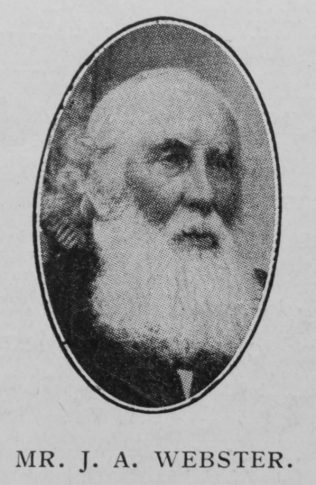 Transcription of obituary published in the Primitive Methodist Magazine by J.M.G.

The Ashbourne Circuit sustained a severe loss in the decease of Mr. Joseph A. Webster on March 12th, 1912. On February 4th our friend attained his ninetieth birthday, and to all appearance he was as active and well as his advanced age would allow. Only a few weeks passed, however, ere God took him. Born in Philadelphia, U.S.A., Mr. Webster came to England eighty years ago, and at once began to attend the Primitive Methodist Chapel and School in Hagnaston (Hognaston). He was most faithful in duty, earnest and self-sacrificing in service, and true to his convictions, for which he has suffered imprisonment.

As society steward and Sunday School superintendent, his fidelity was unwavering, his energy untiring. It was his proud boast that during a period of thirty years he never missed a Sunday School session, nor was he ever late. He loved the Word of God with intense passion. So he passed away, strong in faith, fervent in spirit.

Rev. J.M. Gunson conducted the funeral service, which was largely attended by his own family and members of different societies. A memorial service was conducted by Mr. Geo. Wigley, the senior local preacher on the Circuit.

Joseph was born on 4 February 1822 in Philadelphia, U.S.A. His father, William was a book-keeper (marriage certificate).