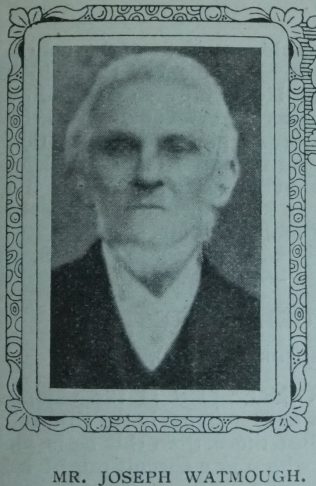 Mr. Joseph Watmough (Nottingham II. Circuit) for years has had the reputation of a successful local preacher. Although in his 66th year, his ministrations are characterised by “freshness” and energy. His utterance is clear, devotion unquestionable, message unmistakeable. Of retiring disposition, he is nevertheless fearless in Gospel proclamation, earnest as temperance advocate, and strong of convictions on questions of social reform. He has experienced Pentecostal blessing and has been used to the salvation of many.

His hair is whitened with the years, he stoops as beneath burdens too heavy to be borne, but his energy is unabated and his labours uncurtailed. In heart he is still young. He grows restive unless fully employed. Hockley Chapel is the scene of his labours, subject of his prayers, centre of his reminiscences, place of his affections. Baptized in Hockley Chapel, there, too, converted when but fourteen years of age, most of his life has been spent in connection therewith.

“I have seen,” says he, “Hockley up and down several times. I still pray, ‘Lord, revive the work here.’” His sympathies are with the progressive evangelistic work.

“As a boy I stood in front of the chair on which stood the Rev. John Eckersley to preach.” He recalls the powerful labours of the Rev. Robert Parkes, “who made streets tremble,” the Rev. C.H. Boden, “who moved the congregations to the highest pitch of enthusiasm,” and of others. “They were giants in those days.” Of the street preaching, of those golden days of memory, he often speaks. “They preached out of doors then.”

For the Rev. S Antliff he had special regard. Speaking of the inspiration and worth of his ministry at Hockley (1856-61) he says, “He has a special care for us young men; he formed a library of over five hundred volumes, and met us weekly to give instruction.” Out of that class not less than four went into the ministry. When but seventeen years of age, under the instruction of Mr. Antliff, he graduated for the plan. Later he was, for a short time, ministerial assistant on the Hoxton branch.

For several years our brother has been a widower. His now sainted wife often said that his prayers had kept her alive for years. During a prolonged affliction she firmly believed that she survived many crises owing to his prayers.

Still studious, and ever hopeful, he maintains his reputation as a preacher, and his power as a man of God. His face is to the future. May it be brighter and more bright unto the eternal day.

Joseph was born in 1841 at Sneinton, Nottingham, Nottinghamshire. His father, John, was a framework knitter in the hosiery business.

After starting work as an errand boy, Joseph became a sinker maker. Sinkers were metal weights used on knitting machines.