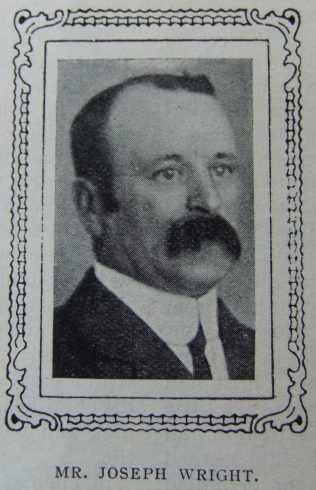 MR. JOSEPH WRIGHT is a Primitive Methodist by blood and by conviction. His father, Mr. Thomas Wright, is an old and respected member of our Wettenhall Society, where three sisters are all  enthusiastic workers for the church, one of them serving as Society steward. His brother, Mr. Will Wright, is a member and devoted worker in church and choir at Alpraham, and general secretary for anything that comes handy. Another brother is a local preacher with the Wesleyans. Mr. Joseph Wright serves his church at Alpraham in many capacities. He has been for a number of years Sunday school superintendent, having also special charge of the Bible Class. Until recently he was President of the C.E., but the need arising for an energetic secretary, he allowed himself to be deposed from the one and nominated for the other with characteristic willingness. He has been our Society steward at Alpraham for nearly twenty years, and discharges his duties with the same keen interest and conscientiousness which are displayed in his successful business He is a man of few words and many deeds, a capable man of affairs such as a minister delights to find at his back, and is heart and soul for the welfare of the Kingdom at large and his own appointed corner in particular. His own simplicity of nature and hatred of fuss check the pen from any extravagance and even from what many would assert as his due. Suffice it to say that if Alpraham Society does not increase and flourish under his stewardship none will be able to lay it to the charge of Mr. Joseph Wright. Our friend is now just in the prime of life, and his many friends throughout the church will join heartily in wishing him many more years of joy in useful service.

Joseph was born abt1866 at Bunbury, Cheshire, to parents Thomas and Martha. Thomas was a carter (1871) and later a farmer.