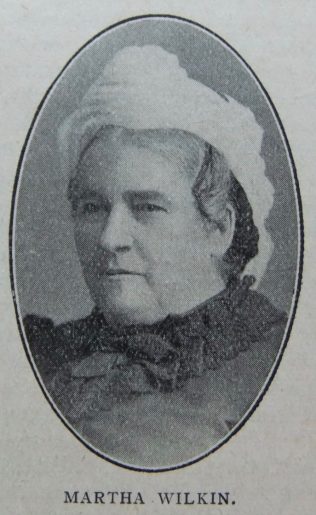 There is some danger that an important institution of Methodism may become defunct. In these modern days of small circuits and easy travel there is a gradual disappearance of the “preachers’ homes,” which have played such a prominent part in Methodism, and without which Methodism, and especially Primitive Methodism, could not have been what it is. Ah, those preachers’ homes, what havens of rest they were! What self-denial and self-sacrifice they represent! What provision they made for tired and weary workers in village evangelization! What centres of influence and power many of them were! They were a fine institution in past days. ’Tis a pity they so largely disappear that in some quarters to-day, with far better accommodation, it is more difficult to find entertainment for strangers than in the less-favoured days of the past. Whether the standard of entertainment has altered, or the spirit of domestic self-denial is less, I know not, but the fact remains.

“Will you take in a servant of God who is tired and weary?” said Robert Key as he turned up one night at a Suffolk farmhouse. And, after consultation, the farmer and his wife said: “Yes, come in; we will find you a bed and some supper; come in.” And for forty years, at least, that farm was the preachers’ home in that village. Silver and gold they had none wherewith to pay for entertainment, but generally these servants of God left behind an influence and blessing which no monetary payment could equal. The family altar at which they kneeled, transformed many a home; and sons and daughters, as they grew up, felt the “preacher’s” influence upon their hearts and lives. It was not the “parson” in those days; it was the “preacher” who was coming, and it meant something in the home.

Outsiders have frequently wondered what it meant. A Congregational minister was walking across North Norfolk to reach his home from a Sunday service. His call home was urgent, and he had started early to walk. When he reached the village of L—— he sadly wanted breakfast, and seeing a labourers wife by her cottage gate, he said to her, “I’m the Congregational minister of C——. I was preaching at W——— yesterday, and am walking home this morning. Would you mind making me a cup of tea?” “Oh, come in, sir,” and quickly the cloth was spread, white as snow, a home-baked loaf of bread with butter, egg and tea placed upon the table. Our friend did ample justice to the homely fare, and then, refreshed and strengthened, said to his hostess, “And how much am I in your debt?”

“Debt, sir! What do you mean?” “Why, What may I pay you for the excellent breakfast you have provided for me?” “Pay! pay!” said the astonished woman. “ This is a preachers’ home; you don’t pay here!” Taken quite aback, our friend began to apologise for inviting himself to her home, but she only replied: “ Don’t—don’t, sir! Why, this is a preachers‘ home, and when you come this way again call in, and you shall have a cup of tea.” And fine homes they were, though frequently in the labourer’s cottage.

Mrs. Wilkin’s home was “preachers’ home” for fifty years. She lived in a little village – or, rather, hamlet – eight or ten miles from the Circuit town. Early in her life Robert Key missioned that part of Norfolk, and commenced services in the blacksmith‘s travis in the village—or, rather, on the common. The young girl, then cook at the “White House ” close by, attended the services, and became one of the first members of the infant cause. A young man soon fixed his eyes on the comely maid and proposed marriage to her. The offer was accepted, courtship ripened into marriage, and a home was formed in the little two-roomed cottage at the corner of the common, quite near the blacksmith‘s preaching-place. Soon after marriage the preaching night came round, and Martha said to her husband: “William, preacher must stay here to-night.” “Why,” said he, “we have only one bedroom!” “I know it,” she replied; “but preacher must sleep with you, and I will make up a bed on the hearth downstairs for myself.” And so it was arranged. The preacher gladly accepted the offer, and found a warm welcome in the cottage home; where many a preacher, local and travelling, subsequently found a delightful haven of rest in the old thatched cottage. Robert Key, Ephraim Blake, George Seaman, John Smith, and many others – how they wended their way along rough and storm-swept roads to find a warm corner, and a warmer welcome, in the little house.

The Lord blessed the house of Obed Edom because the Ark of the Covenant was there and many a home has been similarly blessed because the servants of God have been entertained within.  It was so with Mrs. Wilkin.  She was a fine soul, and her husband was an equally fine man. Both had pluck and energy and perseverance. The strength that enabled them to throw in their lot with the little despised society, regardless of the scorn and derision of others, enabled them to strike out for themselves. William’s wages were ten shillings per week, but the sturdy wife said: “I must add to that,” and she took in laundry work from the big house.

Presently they thought they saw an opening for a village shop, and turned the little room into a general store, and without any experience, but with a great amount of common-sense, they started to buy and sell. The time was ripe for the enterprise, and surprisingly they prospered. Another room was added to the little cottage, for “We can’t do without another room for preacher,” she said. The hand-cart gave way for the pony, behind which many a preacher gladly rode, and then the pony gave way, or received additions of its kind when the farm was taken, and stalwart horses came from the farm into the little yard. It was the old story of Divine blessing resting upon sanctified industry and self-denying devotion.

Mr. Wilkin was a fine, gentle spirit, who won the respect of all who knew him. He became society steward, class leader and circuit steward, and passed away to his reward beloved by all.

Mrs. Wilkin lived on to render fine service to the little church. She had been a splendid help meet to her husband, full of strength and courage, insight and affection, a fine business woman, and a tower of strength to the little village church. The old blacksmith’s travis had long since given place to a neat but beautiful little chapel “on the hill,” in which these friends had laid the foundation-stone; and when her husband died, and a debt of £100 remained on the building, Mrs. Wilkin paid it off. She then thought stables would be a great improvement, as several of the congregation drove up to the services – a great change from the early days.

“When I came into this neighbourhood,” said Robert Key, “you didn’t own a donkey amongst you, but now you drive to service with your ponies and traps.” And so she paid the bill for the erection of stables and gig-house, making the property complete for village worship.

But it was the school she loved. How she gathered the children round her! With what care she prepared her lesson for Sunday before International Lesson helps were provided! And when they were, how constantly she used them right up to the end of her long life! Her buggy was a familiar object on the road to service. “Any of you going to ride?” was the usual invitation, and if no old man or woman needed help on the road the children would eagerly crowd in with the teacher they loved.

What letters came from scholars far away to the old cottage! – for she never left the home to which her bridegroom had taken her. But the anniversary was the great day. The waggon was run out on to the common, and, gracefully festooned, formed the platform for the children and choir. Two waggons generally, and for miles round the people came. It was open-house that day! What tables were spread! A festival, indeed! It was then her joy was full. For she was truly Martha. Not cumbered about with much serving, but serving His disciples as Martha of old had served the Christ Himself. Yes, Mrs. Wilkin was one of the many who, by her generous care, made Home Mission work on wide stations possible. She never preached, but she helped those who did. She prayed, wrought, gave, hospitably entertained, until the Master called her home. The evangelisation of Norfolk would have been impossible without these devoted saints. The old cottage is gone. Her name remains!

Based on the information in the sketch I have been unable to identify Martha in census returns. Can anyone point me in the right direction?