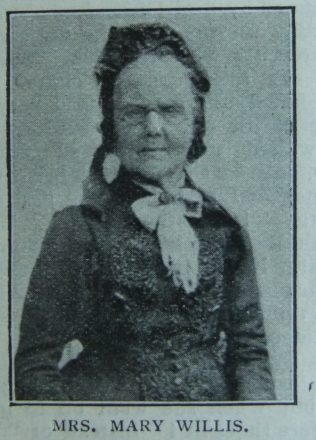 Mrs. Willis was a member of Bourne Church, Byron Street, Macclesfield Circuit, over sixty-five years, and the oldest member of our Church in the Circuit. She was born in 1819, and died March 3rd, 1907, in the eighty-eighth year of her age. She lived a strenuous life. Left an orphan at eleven, she, with several other children, were sent to the Union when her mother died. She heard the bell tolling for her mother’s funeral, and she begged the matron to let her attend it, but, the matron replied “My child, I dare not.” A similar request we venture to say would not be so treated now. A custom prevailed in those times of sending those that were able out to work in the day, returning to the Union at night. One day Mary Willis ran away, and for three nights slept in Congleton Park. Hungary and cold, she wandered to the river side, and was tempted to drown herself, when she heard a voice saying, “Don’t, what will become of your soul.” Whereupon she found her way to Macclesfield, attended the meeting house at Sutton, and became a member of our Church there. She was present at the laying of the foundation stones of our first chapel in Byron Street, 1843, and was also present at the foundation stone laying of the new one in 1905. She lived a consistent Christian life, was most regular in her attendance at the house of God. For many years she was a widow, and as the end drew nigh she had a longing desire to depart and be with Christ. Shortly before her death, clasping her hands, she said to a friend, “Oh won’t it be nice when I’m crossing the Jordan with Jesus? Oh, that will be glory for me!” and in this state of mind she passed to the “rest that remaineth;” and the rest will be all the sweeter for the roughness of the way she travelled.

The writer conducted a memorial service for her in our Byron Street Church, which was crowded on the occasion.

Mary was born in 1819 at Oldbury, Warwickshire, to parents Thomas and Maria Prynn. She was baptised on 25 June 1820 at Oldbury. Thomas was an engineer.

Charles was a cotton spinner and later a shoemaker. They spent some of their married life at Mellor, Derbyshire, before returning to Macclesfield.

The 1881 census records that Mary was working as a midwife at that time.