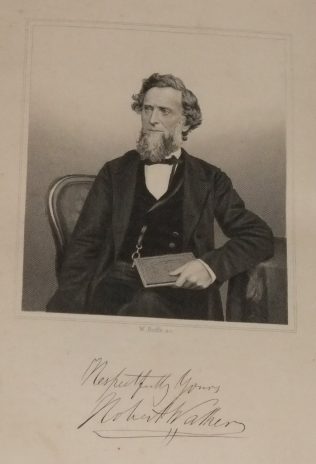 Robert was born abt 1809 in Cumberland to parents Robert Walker and Abigail Irwin.

Robert  was the assistant leader of the first PM Class set up by William Lawson in Toronto in 1829. Robert had been an apprentice to William Lawson as a draper in England, and bought the business when William Lawson moved to Brampton.  Robert became one of Toronto’s wealthiest merchants.

Robert, who was convinced of sin under the preaching of Mr. Johnson, on one of his visits to Brampton, had emigrated in the year 1828, and after a year’s residence in Quebec, had pushed farther west to Little York (Toronto), where he met his former friend and employer, and with whom he heartily co-operated in laying the foundation of the new denomination.

Kendall records that it would be difficult to point to layman of a finer type than Robert Walker. ‘He was no seeker of office, yet there were few position of trust he did not fill. He was a generous giver to good causes, and he gave from principle and by rule.’

Robert was the chairman of the great public meeting at the Grimsby Conference of 1869, and with J C Antliff, represented Canadian Primitive Methodism at the Methodist Ecumenical Conference of 1881.