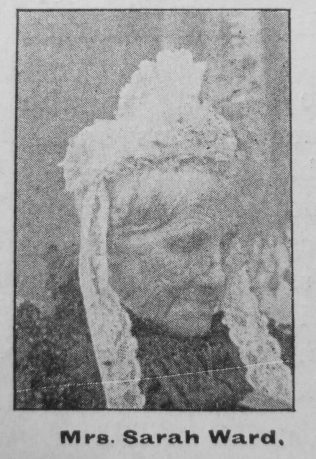 Mrs. Sarah Ward, the wife and life-long companion in travel of the late Rev. Richard Ward, was born at Lichfield, in the year 1819.

Her family was connected with the Wesleyan Church, and she, while very young, realized a change of heart and rejoiced in the blessedness of being born again of the spirit. When the first Primitive Methodist Missionary to Lichfield, the Rev. Sampson Turner, came into the street where she, a small child, lived with her widowed mother, singing “Turn to the Lord and seek salvation,” her mother invited him in and gave him refreshment, and her house continued the home of Primitive Methodist Missionaries as long as she lived.

So bitter and unrelenting was the opposition of the Church party that the Missionaries had to discontinue their labours for a while. But in the year 1836 two young men were sent from Darlaston and Birmingham Circuits, Richard Ward and J. Wilson, to re-mission the city and the villages around.

During this time Miss Beather, the subject of this memoir, united with this struggling cause, and rendered invaluable assistance as a visitor, tract distributor and class leader. She was highly gifted as a public speaker, having at command a fine flow of language, inherited from her mother, combined with a good share of sound common sense, and so very soon her name appeared as a preacher on the circuit plan. She frequently walked many miles on the sabbath day to preach the good tidings of salvation to the villages around Lichfield, and very many testimonies have been given of the souls converted and the good received through her preaching.

On July 10th, 1841, she was united in marriage to Rev. Richard Ward, who was then travelling at Oswestry. A few days after their marriage she organized a society class and took up her work as a local preacher, rendering wonderful help to her husband in his holy toil. The experience she had gained in her maidenhood proved of great value to her when she entered into the enlarged opportunities and responsibilities of a minister’s wife.

Proving herself quite equal to the position, she discharged her onerous duties with so much tact and ability that she not only escaped unpleasantness in the circuit, but won the confidence, esteem and love of the people among whom she laboured. So untiring was her interest in the Church that very considerable sums came into its treasury through her gifts and appeals, and so real was her devotion that she could say “I never saved a penny in my life, all went to the cause, and if I had my time over again I would do the same.” We do not wonder that possessing such a spirit of consecration she and her husband were greatly successful in building up the Church and gathering men into the Kingdom.

Our sister was a woman of marked mental ability, and of refined tastes. Both in the time of her active service and during her later years her society was sought by the cultured and refined. While she took great interest in political questions and could always discuss them very intelligently, yet the supreme concern of her life was the welfare of the Church she loved. After her husband’s death she went to reside with her family in Dudley, and six years ago she settled down at Sparkhill, Birmingham. During this time she was never able to take up her much-loved work, and on account of her extreme feebleness, latterly could but seldom get to the House of God. She never attempted any public work during these years, but once, and that was to speak at a women’s meeting in our Highgate Road Chapel, Birmingham, but the effort was too much for her feeble strength and she came home feeling that her work was done.

She used often to say to her children “Oh, how much I wish I could work for the Church as I once did.”

To her daughters she was a rock to lean upon, their joy in the home, their inspiration in work in connection with which her counsel was always invaluable. She often said to her grand-daughter “Oh how I wish the Lord would take me home, I am so tired, I want to be at rest.” The end came suddenly at the last; after eight days of acute suffering, on July 2nd, 1903, the weary wheels stood still and her spirit fled “ to be with Christ which is far better.”

The funeral service was conducted by Revs. G. Windram, C.L. Tack and W.H. Taylor. The first part of it was held in our Sparkhill Chapel, Birmingham, and the second part in our Lichfield Chapel, where she had spent so many happy hours and in connection with which some of her best work was done. Revs. C.L. Tack and W.H. Taylor paid sincere tributes to the worth of our sister, especially bearing witness to her sancti?ed intelligence, motherly tenderness, and lofty Christian character, her patience in trial, her courage under privation, her spirit of entire consecration to Christ and His Church.

Many friends from circuits where she and her husband travelled have written letters to her daughters bearing beautiful testimony to her character and work.

She was one of those faithful pioneers of our Church whose memory should be very precious to those of us who have “entered into their labours.”

She sleeps in Jesus. Her remains were fittingly laid in the same grave as her husband’s, in Green Hill Churchyard, Lichfield, there to await the resurrection of the just.

Her daughters and grandchildren are comforted by the precious memories of her useful and saintly life. May they all meet her again, when toil is finished and victory won, where the Lamb leads His people unto living fountains of waters, and God wipes the tear from every eye.

I have not been able to identify Sarah’s parents.

Before her marriage Sarah made straw bonnets.