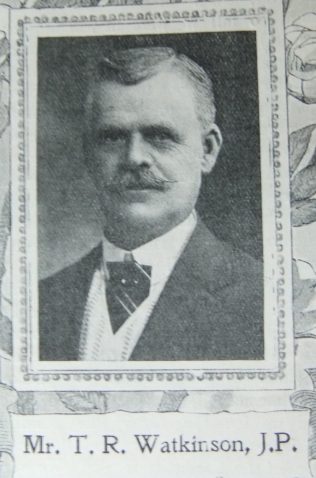 The senior Steward of the Grimsby Third Circuit, Mr. T.R. Watkinson, J.P., was born at Market Rasen about fifty years ago. At the age of seventeen he came to Grimsby, and has since made for himself a position in the town of his adoption, being elevated to the magisterial bench by the present Lord Chancellor. Beginning to preach whilst young, and having intellectual and speaking gifts, his services as a local preacher have always been in demand. But it is in the Sabbath School that most of his time has been spent, and where both with teachers and scholars he is deservedly popular. For twenty-nine years he has held the office of superintendent, first at Ebenezer and then at Hainton Street, and all his friends hope there are many years of usefulness for him in the future. Mrs. Watkinson is a daughter of the late Rev. J.T. Shepherd, and has always been in full sympathy with her husband’s work.

Thomas was born in 1857 at Market Rasen, Lincolnshire, to parents George Spencer Watkinson and Susan Robinson. George was a pipemaker.

Thomas worked as a pipemaker as a youth living in Market Rasen. In Grimsby he became a fish merchant.

Thomas married Annie Elizabeth Shepherd (1856-1937) in the summer of 1879 in the Glanford Brigg Registration District. Annie was a daughter of Rev James Thorpe Shepherd.