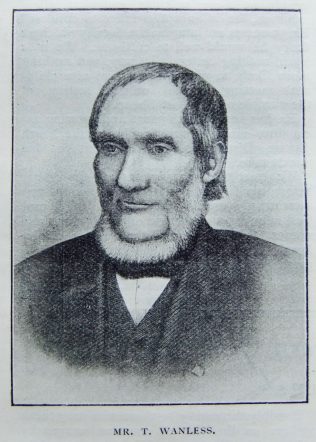 Transcription of Sketch in the Christian Messenger by Tom Grieves

On glancing at the photo below, many of our North-Country readers will find the words of Hamlet rush to their lips: “Alas! I knew him well.”

Between the ‘‘fifties‘’ and the “eighties” the name of “Tommy Wanless” was associated more or less with all the Primitive Methodist gatherings that took place in south and mid-Northumberland. Not that he was at all times a speaker or preacher, but Tommy was there, and very soon indeed did everyone know about it.

We feel at this point, we would have liked to have given a fuller account of him, and it must not the supposed we can do justice to, so unique a character in the brief space we have allotted to us.

Possibly there may be those who may think we err on the side of common usages by calling him Tommy. His name certainly was Thomas, but to have talked or even announced him as Thomas would have been somewhat misleading to a Northumbrian audience. But to announce that Tommy Wanless would lecture on “The Bible” simply meant a crowded house – everyone knowing exactly who it was to be.

As a preacher, Tommy had a name. That was something for which he could feel justly proud. What’s in a name? There may be much, perhaps but little. It all depends upon a special “something.” That “something” that lay behind the name “Tommy Wanless” was the result of a life well sustained, and “force of character.” No doubt this was the bed-rock upon which was built his popularity, for we must emphasise here that, whether at home or abroad, Tommy Wanless was a man after God’s own heart.

His sermons evidenced at all times an intense earnestness and spirituality – characteristics by which the dignity of the pulpit was ever sustained – yet how we have at times had to sacrifice our gravity, when we fain would have done otherwise. His pawky humour would ever show itself, even under the most distressing circumstances, as the following incident will show:—

Preaching to a large congregation from the text “If thou hast run with the footmen and they have wearied thee . . How wilt thou do in the swelling of Jordan,” he commenced his sermon by first stating that he had been told during the week the members of that particular church had become very, cool and indifferent, and that they needed arousing and warming up a bit, so they might just as well prepare themselves, because he was going to preach them a fire and brimstone sermon. At it he went, talking with a remarkable volubility. In the middle of his subject he drew a figure of a mariner at sea getting into strange waters, and in order to keep in deep waters, the sailor, ever and anon, had to take his lead-line and measure the water’s depth. Tommy, in order to make it as clear as possible about that “sounding lead” of the sailor, took out his big verge watch, to which was attached a small piece of leather shoe lace – doing duty for an albert – and, leaning over the pulpit rail, he sought to give his audience a clear idea of what he meant by letting the watch dangle in sight of them. The illustration, however, ended disastrously for Tommy, in the moments excitement, let slip the watch, which fell with a crash to the floor. “Dear me,” he exclaimed. “that watch always did go too fast, but I doubt its run itself to a standstill this time.”

He did a good deal of lecturing in his later years of service he was very successful. Perhaps the lecture in which you got the best out of him was the one already referred to on “The Bible.” He had a remarkable knowledge of his subject, and his quick, racy, and apt utterances revealed a vocabulary that would have done credit to any modern Demosthenes. He baffled all shorthand writers. The pace was too hot. There is only one case on public record where Tommy was brought to a standstill. On this occasion several young pulpit aspirants were sitting ready with pencil and paper to catch any particular note that might strike their fancy. Tommy was going at high speed with one of the long strings of epithetic niceties with which his lecture abounded, when suddenly he stopped, stammered, and strove again, but to get the word “vicissitudes” pronounced he was dead beat. Leaning over the pulpit rail he said to one of the note-takers, “Aw say, Willy, aw cannot get horoot: just put down in brackets Four teeth out of the front, Aw lost them at Work yesterday.” . . .

Some of our readers may remember the South Shields Conference Sunday. A huge crowd stood outside of the Glebe Chapel waiting to go in. It was evident to Tommy that the passing into the chapel and in ascending the steps would be fraught with a certain amount of danger. Turning to a minister standing immediately behind him he proposed a “ring” and a short address. The Rev. gentleman made the announcement that Bro. Tommy Wanless would give an address. In a moment a ring was formed in the street, and Tommy was “going at it.” The little man of God seemed full of power and inspiration. The move had its desired effect; the crowd passed carefully into the chapel. Men seemed strangely full of power. The audience, inside, was fairly on the move. Things seemed so graciously mellow. The Spirit’s wireless telegraphy was going at high pressure. The Rev. Mr. Harrison was the preacher. He stood at the desk and looked on his audience somewhat searchingly. Before he could announce his first hymn a loud and shrill cry came from the gallery: “Bless the Lamb, it’s good to be here.” The effect was electrical. It was Tommy. Such was the emotional spirit of the congregation that Mr. Harrison smilingly suggested that they should “climb down a bit.”

During most revivals there are very few places but what have their regular, one, or two, who are first to come out to the penitent form. Cramlington was no exception to the rule. Joe Smith was generally first man, and he occasionally came out between times of general revival.

Tommy was nearing home – coming from an appointment one Sunday night – when he was met by a few of the brethren of his church. In their midst was Joe, who had that night been once more to the penitent’s form. Guessing the cause of Joe’s beaming countenance, Tommy accosted him:- ‘‘Well, Joe, been up for another dip?”

“Yes, Brother Wanless, I’ve got a good hold this time,” replied Joe. ’“Good job. aw’m sure,” said Wanless, “because I was just thinking that we were going to have to get a gun, and shoot ye at the penitent form as the only safe means of getting you safely into heaven.”

It was a pointed thrust at Joe’s irregularities.

After a special night with the Salvation Army at Bedlington, Tommy went to the bachelor quarters of the captain. The night, before bed time, was spent in much singing and prayer. Tommy had to sleep along with the captain. It was well into morning before Tommy dozed off into a welcome slumber. He was suddenly awakened by a violent attack being made upon his face, and more especially his ears. The captain was labouring under the impression that he was in a prayer-meeting, for whilst holding poor Wanless firmly by the ears, he was declaring in no uncertain tone “I’ve got hold of the horns of the altar.”

“Now’t at all the kind,” yelled Tommy; “it’s my ears‘ man,” and kicking out with his feet he had even then great difficulty in persuading the captain otherwise. That was Tommy’s last experience with an Army captain as a bed-mate.

Space forbids us to give any more of the incidentals with which his life bristles. To present only that part of his nature, however, would be to do an injustice to his sacred memory. In brief, we give other traits of character. Tommy was a hard worker in his own church at home. In his home life he had his share of trial, he had family bereavements; he had his disappointments. Of the general run of ills that the flesh is heir to he had his share, and in some instances they were, to say the least, cruel. Amidst it all his faith in God never relaxed. He was true to his convictions, true to his principles, and, most of all, true to himself. His advancing years marked an ever-deepening spiritual life, enlarged his conception of higher manhood, and added force more and more to his individuality. The impetus that Tommy Wanless was able to give to the beautifying and ennobling of the moral character of his neighbourhood will be difficult to estimate. Nay, he could never know the extent of his own usefulness. He was but a hard-working miner, and thus not overburdened with finance, and he, therefore, could give but little monetary help. Yet he gave something better, and which proved of more real worth – he gave himself, and that unsparingly. It would be folly to attempt to chronicle the extent of his self-sacrifice. Right away from the dawn of his second birth to the setting of his sun, his one effort was an unmitigating zeal in the service of Him he loved. What implicit trust in God he exhibited. This was no doubt the secret spring of his optimism. He was wonderfully optimistic. In the pulpit he seemed a bundle of nerves let loose. Full of vitality and enthusiasm. How oft we’ve heard him say that he was wholly indebted to Primitive Methodism for where and what he was. He truly owed much to his church, but when we take a resumé of his life and work in her domain, we are bound to acknowledge that this church is much indebted to him. He was faithful, he was loyal, and ever demonstrated a love, even to a passion, for the church of his choice. To it he was an honour – a pillar of strength. He was kindly, affectionate, sympathetic in look, word, and action. How gently he could brush aside a tear of the bereaved one; how he could enter into the feelings of those hearts bowed down with grief. With what righteous indignation he could denounce oppression, unreality, and a canting hypocrisy. Tommy was genuine, he was real, and to the spurious he could give no quarter.

The world was made better by his life. He raised the moral tone of his people; he added to the moral asset of his country.

“His life was gentle, and the elements so mixed in him, that Nature might stand up and say to all the world: ‘This was a man.’”

Tommy was baptised on 20 March 1815 at Newcastle upon Tyne. His parents were Thomas and Jane.

Tommy worked as a coal miner. He married Mary Gregory (abt1812-1882) on 27 May 1837 at Tynemouth, Northumberland. Census returns identify five children.