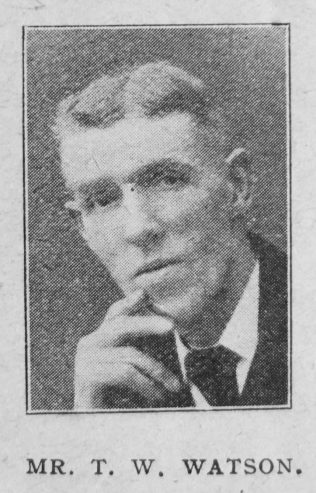 Transcription of Sketch In the Christian Messenger by Rev. W.R. Bird

THE subject of this sketch is an outstanding figure among the local preachers of our Metropolitan Circuits. His past makes a worthy record. He is the son of Thomas Watson, well-known in the city of Hull as a local preacher, poet, passive resister, etc., converted under the ministry of William Clowes, and is still living and within measurable distance of ninety years of age. His mother was a quiet, sweet, noble Christian woman, and ere her passing, greatly revered by all who knew her. The son was born at Doncaster in 1863. After childhood and the usual educational period, he at seventeen became connected with the Great Northern Railway, and on its clerical staff still remains respected and honoured by his compatriots. In early life he gave himself to Christ, and with unswerving consistency through the now long years witnessed a good confession. The call of his important company has necessitated his removal to Arlesey, Ashwell, Derby, London, and since Enfield, his duties still connecting him with headquarters at King’s Cross. At each of these centres he has been in most active membership and service with our church. At Derby he was linked with heroic adherents at far-famed Kedleston Street. He was a live member in several departments – organist in Councillor Potter’s Class, member of choir, open-air worker, and preaching in the several churches. He is ever enthusiastic as he narrates the success of these wonderful times.

In London he was associated with Caledonian Road Church in its most red-letter years, under the respective ministries of Rev. Thomas Guttery, Rev. J. Toulson, Rev. G. Shapcott, Rev. T.J. Gladwin, Rev. H. J. Taylor and others. He was a member in Mr. Levi Newell’s class when it numbered more than fifty active, all-alive members. In those halcyon days from 7.30 a.m. to 9.30 p.m. there were almost continuous meetings – prayer, aggressive evangelistic services in the streets, full congregations in the church, and all along the glory of the Lord revealed, and regular conversions. Our friend was one in the array of magnificent men who did great exploits for God in the saving of souls. It was the day of extension and prosperity, new churches being founded at Woodberry, Dartmouth Park, Harringay, Finchley, King’s Cross, etc. The names of N. Everitt. J.B. Stather, the scores of incidents of power and blessing are to him an incalculably precious memory.

In 1898 he made his residence in this delightful and historic suburb, and has given a good account of himself in strenuous devotion and service. He is useful in all departments of church life – presiding at the organ at most week evening services, prayer meetings, addresses at C.E. meetings, preaching throughout the circuit, and often in other churches, and none more loyal. His place is never vacant on Sunday unless engaged on some duty or held back by ill-health, and one may count on his presence at three week evening services per week without fail. His aliveness takes him beyond the church into many progressive movements. He is an ardent Liberal, temperance reformer and member of the Free Church Council, and for several years its treasurer.

Like most of the men of his county he has individuality, and is ever outspoken and courageous – this colliding with half-heartedness or unreality has sometimes made things warm, but no one who correctly interprets his motive questions either his genuineness or sincerity. He has valuable gifts, and one is a line vocabulary, and frequently his utterances in prayer or preaching are far beyond the commonplace or ordinary.

He is ever supported in his activities by a good wife and a son, lately holding military rank in India, and a daughter who gives appreciated service in Sunday school, C.E. and other departments.

The family is one of those which in long years of fidelity and work have given strength and success to our denomination. We thank God for him and his family.

Thomas was born in 1863 at Doncaster, Yorkshire, to parents Thomas and Ann. Thomas, senior, was a brass founder.

Thomas worked as a railway clerk.