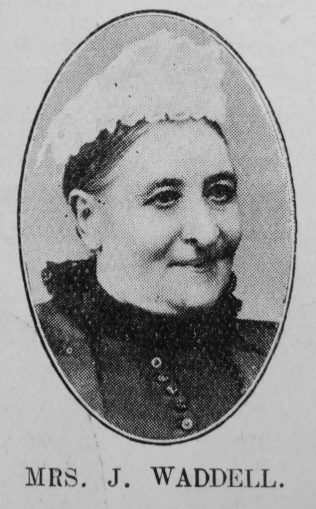 Transcription of Obituary published in the Primitive Methodist Magazine by J.W.W.

MRS. JANE WADDELL, widow of the late Peter Waddell, passed to her reward in her seventy-first year, February 2nd, 1909, at the residence of her son, Rev. J.W. Waddell, Barnsley. Both at Otterburn and Choppington, where the family resided for over thirty years, she made a home for the preachers. A native of Hawksteel, Allendale, she was converted in early life and was a member with the Wesleyans till her marriage. Though of quiet, retiring disposition, she had a firm grip of the fundamentals and lived in fellowship with the unseen.

Her Bible, God’s House, and the family altar, were highly prized and she counted no sacrifice too great for her family. Two sons and three daughters mourn her loss, of whom she was justly proud.

She had been in failing health for two years but remained bright, happy, vivacious, to the end. She walked and talked with God and spoke sometimes of her departure without fear. The truth of God was the anchor of her soul and oft she repeated “God is good.” A kindly providence permitted most of her family to be near her at the last and her patience and Christian fortitude were very marked.

Services were held at Barnsley by Rev. J. Bailey, and at Otterburn by Rev. R.P. Douglas (Presbyterian). Her mortal remains repose beside her late husband at Elsdon, Northumberland, awaiting the resurrection morn.

Jane was born abt1839 at Hawksteel, Allendale, Northumberland, to parents William, a farmer (1841), and Elizabeth.