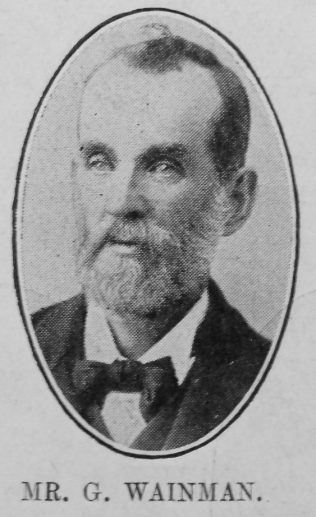 Transcription of Obituary published in the Primitive Methodist Magazine by S. Palmer

Mr. George Wainman was a loyal son of Primitive Methodism. Regular in his attendance, decided in his convictions, and eccentric sometimes in his actions, yet in season and out of season deeply concerned for the prosperity of Zion.

Born in the Isle of Man he was converted and joined the old Wellington Street Church more than fifty years ago. He was fond of Sunday School work, and right up to the end of his days was a devoted worker. For twenty-five years he held the post of librarian in the Sunday School in Douglas. When in 1880 he left for Grangemouth in Scotland the teachers as a mark of esteem for Mr. Wainman presented him with Dr. Farrar’s “Life of Christ.” He joined the Leith Church in the Edinburgh station, in 1887, and remained a member of it until his death.

He held the offices of Society Steward, Sunday School Secretary and Trustee. It was his hope to see the new church built and opened, and God honoured his wish. When scarcely able to walk he persisted in coming to the services.

His end was tragic. He was found dead in his bath. Of his entrance into the eternal habitations of God there is no doubt. Until the morning breaks and the shadows flee away we bid him “farewell.”

In 1851 George is described as a hemp spinner; later he is a customs officer.

He married Jane Clegg (b abt1836) on 31 December 1858 at Huddersfield, Yorkshire. Census returns identify nine children.