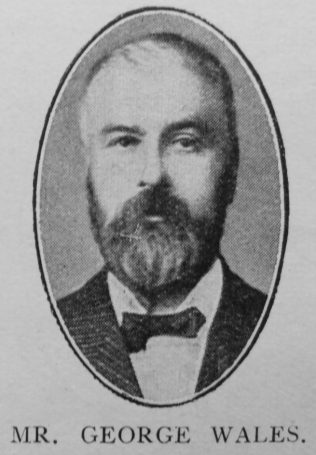 Mr. George Wales departed this life at Low Fell, November 5th, 1909, at the age of 67 years. For 43 years he held the responsible position of winding engineman at Allerdean Colliery, and it says much for his care and efficiency as a workman that no mishap whatever occurred during all these years. He was converted 21 years ago under the ministry of the Rev. J.G. Binney.

For 20 years he held the office of Society Steward in our Low Fell Church, and discharged his duties with rare tact and ability. He had great aptitude in making personal appeals to men, which often resulted in great and lasting good. Our Church has never had a more devoted and loyal son.

In May last a fell disease necessitated an operation in the Royal Infirmary, Newcastle-on-Tyne. This, while it failed to effect a cure, lengthened his days and eased his way down to the end. With no cloud intervening between himself and his Lord, his only care was for the loneliness which would come to Mrs. Wales, who had been his true and helpful partner for 41 years.

He was so ideal a patient that many felt it a benediction to gather at his bedside.

On Monday, November 8th, his funeral was attended by a large concourse of sympathetic friends. Prior to the committal of his remains to their resting place in the burial ground of Lamesley Church, an impressive memorial service was held in our own church at Low Fell, when a remarkably chaste and appropriate address was given by the Rev. J.S. Nightingale. The Revs. H. Pratt, A. Longstaffe, B. Dennison, and R. Clemitson also took part in the service at the grave.

Much sympathy is felt for Mrs. Wales, who, in a brief period, has sustained the loss of a fine family of two daughters, a son, and one of the best of husbands. May our God of all comfort have her in His gracious keeping.

George was born abt1842 at Shildon, Co. Durham, to parents Charles, a coal miner, and Sarah. He was baptised on 31 August 1845 at Shildon.