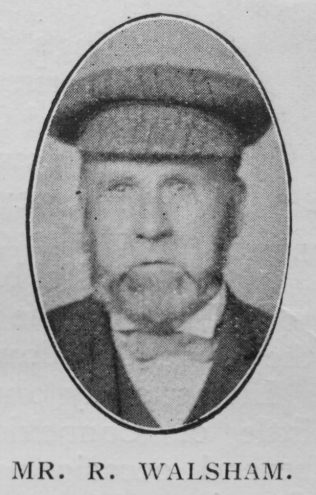 Sheffield VII. Church is the poorer for the loss of the late Robert Walsham, who passed to the Homeland on April 29th, 1910, aged 72.

He had been a member over 40 years, and was a worker in our cause before the erection of the present chapel in 1864. As trustee, S.S. teacher, and in many other ways he faithfully served the Church he loved, and supported her interests to the best of his ability. He was a quiet man. He loved deeds, not words. Unfailing in his attendance at the means of grace, his special delight was the Sunday morning service. He loved the class meeting, the band meeting, and the old-time love-feast.

Two years ago, Mr. Walsham’s health began to give way. He bore great suffering with Christian fortitude. To enquiries during the last days as to his spiritual welfare, he would say “I am in His hands. I am ready to go when He calls.”

Mr. Walsham had completed 50 years of happy wedded life with his devoted wife, who, with a large family of sons and daughters, mourns his loss to-day.

Robert was born abt1836 at South Kelsey, Lincolnshire, to parents William Walsham, who worked the land, and Mary Dunn. He was baptised on 3 April 1836 at St Nicholas, South Kelsey.