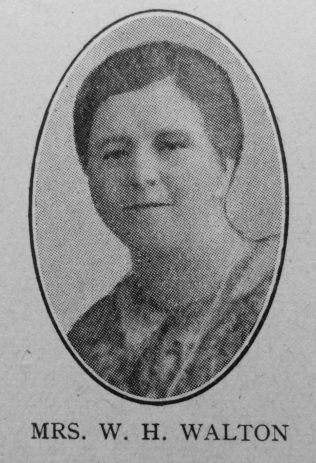 Transcription of obituary published in the Primitive Methodist Magazine by A.W.

Mrs. Walton of the Tanfield Lea Society, in the Stanley Circuit, has “gone into the World of Light” and has left behind a fragrant memory. She enjoyed a life-long attachment to Primitive Methodism and with her husband had been a faithful member and active worker in the Wheatley Hill, Thornley, and Sherburn Hill Societies before coming to Tanfield Lea about sixteen years ago.

Her loss has been keenly felt by a wide circle of people. She was kind by nature and the home for many years has been a place of gracious hospitality for visiting preachers. She was an ardent supporter of all good causes in the village. She was president of the Women’s Bright Hour which met in the Wesleyan Church. She prayed daily for our African Missions and followed up her prayers by systematic giving.

The Church was filled on the day of the funeral by a large and representative gathering. Their sorrow was touched with joy. It was her expressed wish that only hymns of praise and victory should be sung at this service. “I know that my Redeemer liveth” was rendered by the organist in the place of the usual “Dead March.” The interment took place in the cemetery at Stanley. We remembered that it was the week of Good Friday, but we did not forget that the Easter morning was to follow. We deeply sympathise with Mr. Walton and the family.

Note: In Leary this reference is mistakenly attributed to Rev. W.H. Walton