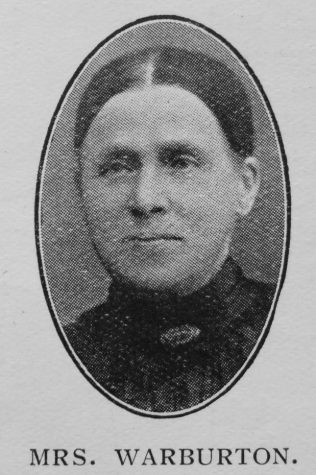 One of the oldest and most devoted members of our Grane Road Church, Haslingden, Mrs. J. Warburton, was born in 1844, and, joining the Church at sixteen years of age, maintained an unbroken membership for over fifty years.

She was the widow of John Warburton—a trustee and for some years the Circuit Steward. With her late husband she shared heroically in the financial struggles associated with the building and subsequent debt extinction of our Grane Road Church. Our Sister Warburton was a woman of devout spirit, seldom absent from her place in the House of God—and held in high esteem the preachers and other servants of the Cross.

Her home was the abode of peace. There her children were trained in the fear of God, and to-day all are members of the Church. Through cloud and sunshine she was ever the same brave, quiet, trustful disciple, never faltering in her devotion to her Lord and His Church.

Her decease was preceded by several months of suffering but there was no murmuring, no rebellion. Her faith was steadfast, her vision undimmed. Strength from on high was given. She looked forward to the summons home, and when it came, on January 30th, 1911, she was ready, and she quietly passed to her rest. She is sorely missed by her sorrowing family, but she has left behind a precious heritage of love and devotion. We shall meet again when the day breaks and the shadows flee away.

Her testimony will abide. It was the testimony not only of word but of deed. She knew how to suffer as well as how to do the will of God, and that is often hardest of all. It tests many a character severely which bore quite easily the tests which come in health. The inner sources of strength in our sister proved adequate. She “endured as seeing Him who is invisible.”

Betsy was born on 8 October 1844 at Cribbed Side, Haslingden, Lancashire, to parents James, a stone mason, and Mary. She was baptised on 17 November 1844 at Haslingden.