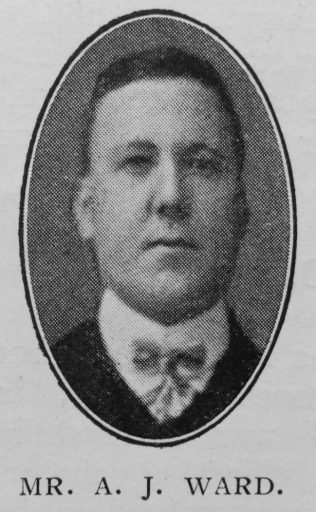 Transcription of obituary published in the Primitive Methodist Magazine by M.T.P.

Alfred J. Ward died August 31st, beIng 28 years of age. Measured by service, he lived a full, eventful, useful life. From infancy he had an unbroken connection with the Church. He was for many years a member, and part of that time leader, of the choir. A faithful assistant class leader, an ardent worker in the Band of Hope, his chief work was rendered in the Sabbath School.

At the time of his death he was superintendent of a school of some 600 scholars. Firm, yet kindly, he exercised a great and beneficent influence over the child life entrusted to his care. He was a member of the South Shields Free Church Sunday School Union Committee.

The spiritual made a great appeal to our brother. He scorned meanness and shams. Everywhere, in business, on the street, in social life, he was straight, true, upright. He had a high conception of the Christian life, and by teaching and example, sought to win others to God.