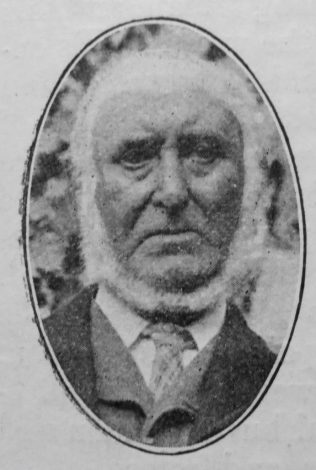 Transcription of obituary published in the Primitive Methodist Magazine by T.A.K.

The Dudley Circuit has recently lost one of its oldest officials by the passing of Mr. W. Ward, of Oldbury, at the ripe age of seventy-six years. Our brother was converted some fifty-four years ago in the old chapel at Oldbury. He at once became a member of the Society, and remained loyal to his Saviour and church until the call came to him to receive the crown of life. During the long period mentioned, and while physical strength allowed, he abounded in the Lord’s work. He was a trustee of the Oldbury Chapel, and Society steward for very many years. He served the church as a class leader for a long period, and was for over twenty years the superintendent of the school.

But his service was not limited to the house of prayer, for he and his house served the Lord. His kind hospitality to all the preachers of the Gospel will ever be associated with his memory It is impossible to estimate the influence of his Christian character, his genial and peaceful spirit, and his genuine Christly service. The Revs. J. Shenton, W. H. Taylor, T. A. Kelley and Mr. J. Wilkes (Circuit steward), conducted the funeral, Mr. Taylor paying a high tribute to the life and work of our departed friend whose end was peace.

William was born on 4 December 1831 at Oldbury, Worcestershire, to parents Richard and Sarah. he was baptised on 21 September 1832 at Dudley Baptist Chapel.

He married Caroline Grainger (b1828) in the summer of 1853 in the West Bromwich Registration District. Census returns identify four children.