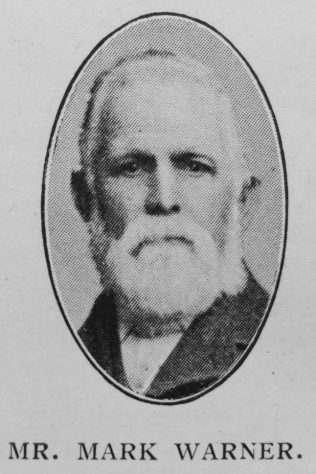 Transcription of obituary published in the Primitive Methodist Magazine by W.T.H.

Woodfalls Church sustained an irreparable loss when Bro. Warner “crossed the bar, at. the age of 69. Born in Woodfalls, in early life he came under religious influences; his mother being one of the first members of our Church. When a young man he surrendered his life to Christ, and for forty years was society steward.

An enthusiastic “Primitive,” no church was comparable with his own. To her he gave unstinted services; in supporting her funds was most generous. He was never a speaker, but he was always a great hearer. No preacher liked him absent from the service. His eager face was ever an inspiration.

He was one of the pioneer temperance reformers of this neighbourhood. His last year of life was marked by a painful illness. Amid it all he was patient, and gave an unfaltering testimony. Bro. Warner was highly esteemed.

At the funeral large numbers attended, not only church members, but brother-tradesmen from all over this district. At the service in the church and at the graveside Revs. J.H. Green, F. Shergold, T.C. Rigg, and W.T. Healey took part.

Mark was born in 1838 at Downton, Wiltshire, to parents George, who worked the land, and Harriet. He was baptised on 6 January 1839 at Downton.