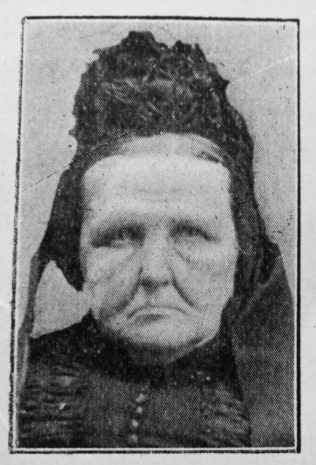 Transcription of Obituary in the Primitive Methodist Magazine by W.A.H. (William Arthur Hammond)

One of the few remaining links between Primitive Methodism to-day and the early days, Mrs. Eleanor G. Warnes was born at Sculthorpe, Fakenham Circuit, February 17th, 1819, and passed away April 24th, 1906. Converted at fourteen she remembered Hugh Bourne preaching on the Prodigal Son in her mother’s cottage. She became a local preacher and for seventy years delighted to tell the story of the Cross, but her supreme work was as the leader of a Society Class.

She had fine mental powers and wonderful spiritual insight – a true mother in Israel. How many have profited by her instruction, counsel, and sound judgment. Her brother, John G. Wright, was our pioneer missionary to Australia, so that wonderful influences have gone forth from that cottage home. In 1847 our sister married the Rev. Mark Warnes, and for over forty years she was his companion and helpmeet in Christian service.

The older people on her various circuits remember her gracious manner, unaffected piety and winsome pleading with the unsaved. Tenderly and wisely she ministered to the sick, and skilfully dealt with many an ailing soul. Resident in Aylsham for thirty years she has taken deep interest in our little church, and the present chapel is a memorial to the devotion of her husband and herself. Visiting her daughter at Ely, wife of the Rev. W. Balls, she had a “stroke,” and for six months was confined to her room. Calmly and patiently she waited for the end, sometimes begging her loved ones to let her go. The Rev. J. Graham speaks of her calm, strong, serene faith in God, and Mrs. C. Hammond writes: “Her words I shall never forget.” Surely the memory of the just is blessed.

Eleanor was born to parents George Wright, a labourer, and Mary Ann Gibbon.