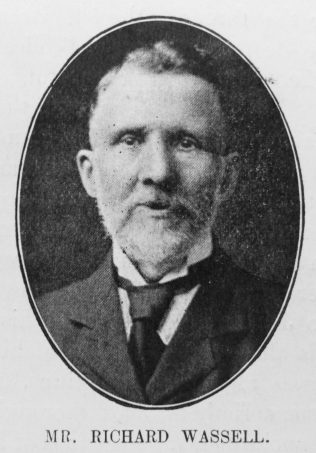 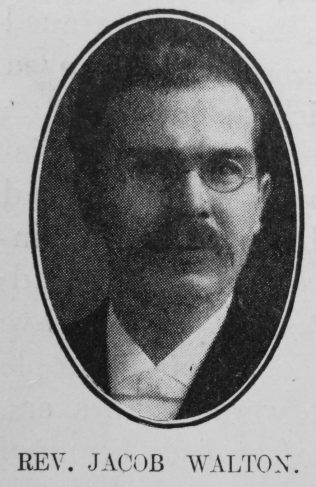 Transcription of Sketch in the Primitive Methodist Magazine in the series “Chats with Successful Class Leaders” by Rev. Jacob Walton

It gives intense pleasure to write of one who has come to be regarded as the “grand old man” of Motherwell Primitive Methodism. Mr. Wassell is now in his seventy-second year and for over fifty years has been a member and worker in the Motherwell Church. A church is rich that is in the possession of a man of Mr. Wassell’s calibre. There may not be high social position, or the influence that gathers round affluent circumstances, but Mr. Wassell’s personality is attractive enough in itself to command the admiration and love of those who know him. He is beloved by all, his manhood is of sterling gold and his labours make him indispensable to his church.

He can now look back upon fifty years of Christian service – years enriched by faithfulness and devotion to his Church, years through which he has been a local preacher, acceptable in his pulpit ministrations and eager to preach the Gospel. For fourteen years he was a Sunday School Superintendent and for twenty-seven years has been a class-leader. He is one of the few remaining links in Motherwell, with Staffordshire Primitive Methodism of fifty years ago. He hails from Bilston and is thus connected with the district that is sacred to all Primitive Methodists.

We have said a Church is fortunate in possessing a brother like Mr. Wassell. It requires no special pleading to prove this. The truth of the statement is patent to everyone who knows the man. Mr. Wassell is no drone; going easy is no part of his nature or policy. He works hard in the evenings and on Sundays for Zion. A typical Sunday finds him at the morning prayer meeting at eight o’clock; from ten to eleven o’clock he is leading his class. Then comes morning service. Afternoon may provide the proverbial “forty winks” but the winks are not prolonged by any means, for time is always found for some visitation. The evening service and prayer meeting are rarely held without his presence. If he has a hobby it is to say a cheering word to a sick person, or secure a new member for his church. He believes in “button-holing” people and enquiring after their spiritual well-being.

During the last few months our friend has been incapacitated by a serious accident. Some time ago he unfortunately fell down some iron steps and broke his collar bone, a rib and his right leg. A most surprising recovery has been made. In spite of his years and to the astonishment of the doctors, the broken bones of the leg have knit together and he is now getting about with the aid of sticks. The “simple life” and the blessing of God have prolonged his years and given him vigour and health of body in old age. The accident has served to reveal the high esteem in which he is held by the whole town. People from other churches visited him.

He is a successful class-leader. His class has a membership of from sixty to seventy men and the weekly meeting is well attended. When in conversation with him he made it clear that he regarded variety of method in conducting a class meeting as essential to success. He is careful to guard against being stereotyped. After the usual opening exercises, hymn and prayer, perhaps a few verses of Scripture are read and comment then made; or a particular topic is selected and made the theme of a short address. The meeting will then be thrown open and the members may speak as they desire. Frequently a member will be invited to give a short address. In this way variety is secured, attention and interest never flag.

Mr. Wassell has a favourite topic. He likes to tell young men that Calebs are wanted; men of courage who will go forward in spite of risk and hardship; men of independence, of spiritual daring, men who will undertake enterprises requiring the faculty of initiative and the power of endurance, men not afraid of hard work.

Our friend is strong on the practical side. He has no speculative tendencies; the problems of theology have some interest for him, but a new theology is not an enticing theme. He is safely embedded in the rock of Evangelical truth. How can he be otherwise? His first religious impressions were formed by Methodist preachers of sixty and fifty years ago, men whose great theme was a present and complete salvation through Jesus Christ. Mr. Wassell has not diverged from this central truth of Methodism and doubtless his insistence upon it in class meeting and from the pulpit has helped to give the church to which he belongs its thorough-going Methodist tone.

In thinking of Mr. Wassell as a Christian worker we are reminded that in the Christian Church from the very beginning, there have been thousands of unknown men and women who have done obscure and yet none the less glorious service in the quiet life of the home, in secluded nooks and by-ways, in the corners of the great vineyard, whose names are written in the Book of Life; Christian men and women,

‘‘Who did their work and then they passed away
An unknown band;
And took their place with the greater host,
In the higher land.”

Mr. Wassell is one of these, but for genuine worth his name deserves to be known throughout the length and breadth of our beloved Connexion.

It should not be overlooked that Mr. Wassell and his good and kind-hearted wife have lived long enough to celebrate their golden wedding. At the beginning of this year a large number of relatives and friends gathered at the house of Mr. Oliver Wassell, Dennistoun, Glasgow, to give hearty congratulations on fifty years of happy married life. May both be spared for years to come and at eventide continue to have the peace that passeth all understanding.

Richard was baptised on 24 January 1836 at Sedgley, Staffordshire. His parents were David, a bricklayer (1841), and Blanche.

I have not been able to identify the date of Richard’s death. The obituary of his wife identifies his life to “be hanging in the balance” in February 1910.