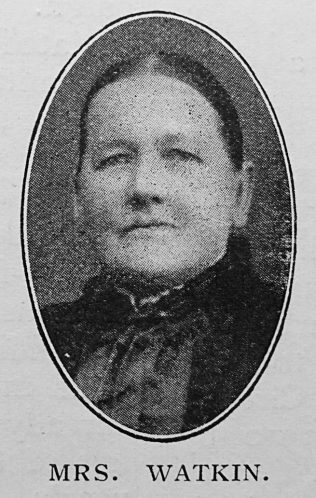 Mrs. Charles R. Watkin, of the Saltaire Road Church, Shipley, passed away somewhat suddenly on Feb. 12th, 1911. She had suffered considerably from heart-weakness for about a year, and had been compelled to “go softly,” but nevertheless, the end, which came in her 69th year, was surprisingly and painfully sudden. She had no dread of death, however. Indeed, a conversation with the writer two days before her passing suggested that the King had already sent a messenger privately to intimate that she must prepare to cross the river.

She had been a Primitive Methodist for fifty years, and for forty-one years had been the partner of Bro. Watkin, who has held various posts in the Circuit, and who is now a Class Leader and Society Steward. She was long connected with our Windhill Chapel; indeed, at one time she and her husband were caretakers there. She loved the gates of Zion, and she loved the God we worship there.

That her loss was keenly felt was manifested by the large number of friends and sympathisers who gathered to her funeral on February 14th. A service was held in the Saltaire Road Chapel (conducted by Rev. F.J. Sainty, who also officiated at the house and at the graveside), and then in the brightness of a sun-lit day we laid the body to rest, until “the day dawn and the shadows flee away.”

Mary was born abt1843 at Bradford, Yorkshire, to parents William, a mason, and Mary.