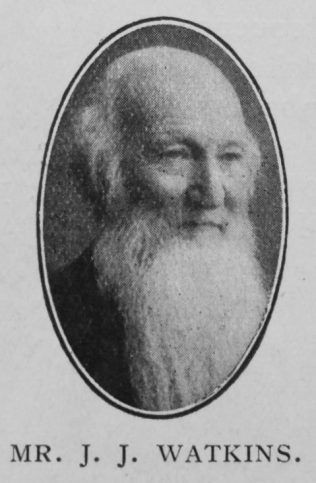 The Marshside Road Church, in the Southport First Circuit, has suffered loss in the home call of Joshua J. Watkins. For twenty-eight years he was on the mission staff of the Manchester City Mission, and was greatly beloved by the officials and missionaries. For nearly five years he laboured with much success in one of the lowest districts in the city. A member of our Higher Ardwick Church, Rev. James. Watkin, who was then minister, could tell of his Christly labours.

For twenty years he was missionary in the Haydock District, and was reverenced and loved by all classes for his earnest labours and Christly life. About four years ago, upon superannuating, he came to Southport, joined Marshside Road Church and became a local preacher. He found great delight in open-air services, cottage meetings, and especially in Bible readings.

His end came somewhat unexpectedly, and he fell asleep on June 9th, 1912, in his eightieth year. A brief funeral service on June 12th was conducted, in the home by Rev. H.W. Bainbridge, at Downall Green Church by Rev. Mr. White and Mr. Walter. Plant. A memorial service was conducted in Marshside Road Church on June 16th, by the writer.

Joshua was born abt1833 at Clatford, Andover, Hampshire, to parents Joseph, a gamekeeper (1851) and Mary Ann. He was baptised on 7 April 1833 at Wherwell, hampshire.