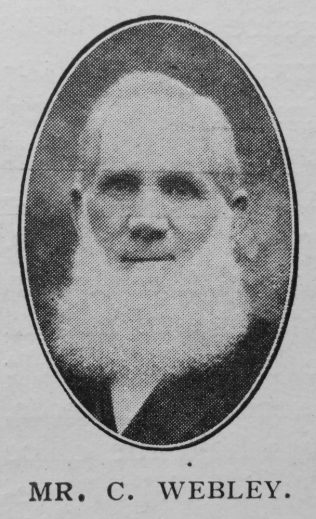 Mr. C. Webley was born at Ditton’s Marsh, Wilts, June 15th, 1841. Converted in youth, he entered into Sunday School work, in which he maintained a devout interest to the close of life.

At seventeen years of age he became a local preacher. In these days the journeys were long and appointments numerous. Into this work he threw himself with soul and spirit. It was his delight to hold forth the Word of life, which he did with conspicuous intelligence and success. Many were won to Christ by his varied ministry. In the Frome Circuit and in Bath, as superintendent of the Sunday School and Class Leader, he rendered yeoman service, and many of those now in the front official ranks of our Church were the trophies of the grace of God through his instrumentality.

The last twenty-six years of his life were spent in Bristol. He was a tower of strength in our Eastville Church in days of stress and storm. As an official he was a pillar covered with lily-work. His life was characterised by the charm of beauty, sweetness, and spirituality.

For some time he showed signs of failing health, yet the end came somewhat suddenly. Smitten with a seizure a few days before his decease on June 30th, 1911, his spirit passed peacefully into the eternal light of the Heavenly home, greatly lamented by all who knew him. But all the honour due to our friend was not reserved till his demise. He frequently represented his Circuits and District Committees in District Synods, and several times represented his beloved Bristol District in Conference. He has left a widow and large family of children, all of whom are loyal Primitive Methodists.