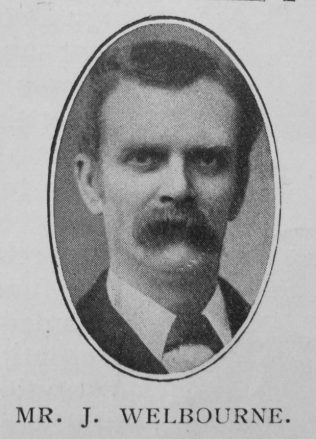 John Parker Welbourne, son of Rev. George Welbourne, one of our early ministers, passed to his  Saviour’s presence, May 3rd, 1910. A member over forty years, he was one of the five far-seeing men who, with heroism born of faith, secured the site for the beautiful Harehills Avenue Church, and became a trustee, S.S. superintendent, and class leader. Some of his best work was done as visitor of Sunday School scholars and the sick members of the Church.

Christ was very real to him and equally precious. His faith was simple and all sufficient. What a treat it was to hear him pray! Humbleness, gratitude, confidence, and the note of triumphant victory were never missing. To him prayer was an unspeakable privilege that brought unbounded blessings. Proud of his church, he gave her the best he had. Intelligent, devout, evangelistic, and with a firm hold on things that matter, he was a brave comrade and a loving and beloved brother. His fellow-workmen greatly respected him.

He has left a widow, a daughter, and three sons, one of whom is in our ministry and the other two are local preachers.