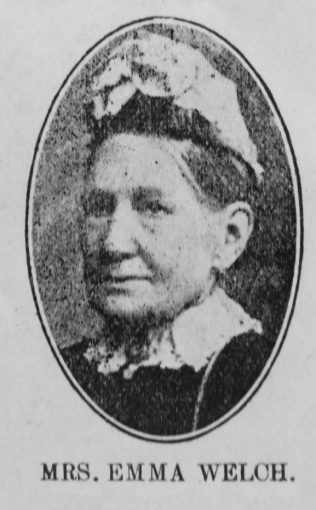 Transcription of Obituary published in the Primitive Methodist Magazine by F. Shergold

Mrs. Welch, of “Meadow View,” Bemerton, entered into rest on Monday, January 25th, 1909. Our  church in Salisbury is decidedly the poorer for her departure, she being one of its oldest and most valued members. Her conversion took place at Homington over sixty years ago, to which neighbourhood she, with her parents, James and Mary Chant, had previously removed from West Woodyates. During the last twenty-eight years or so she resided in the city or its suburbs, and proved a most loyal worker and liberal supporter in connection with our cause here.

She had reached an advanced age—seventy-eight—and for some weeks had been in perceptibly failing health, though her illness did not take a serious turn till the beginning of December last. From that time she gradually sank, there being only one brief rally afterwards. She suffered intensely at intervals, but bore her sufferings very bravely. Her endurance was as fine as her confidence was firm. She never wavered once, either in her faith or her fortitude. Her concern for the salvation of others, too, remained unabated to the last. Said she to the writer six days before her death, “And so you had souls saved on Sunday night!” Then instantly added in a burst of adoring gratitude, “Praise Him! praise Him! I prayed for you with all my might!”

No wonder she is so sorely missed! The wonder would be if she were not. The passing of one so rich in personal qualities—mental and spiritual alike—was bound to cause a big, painful blank in both the home and church. She was a Christian woman “nobly planned,” and as nobly cultured and developed. Because of her exceptional worth she could be ill-spared. Not that her surviving relatives and friends begrudge her going, since the Master wanted her. The loss is theirs—great and bitter ; but for her—to die was gain.

“Her day has come, not gone;
Her sun has risen, not set;
Her life is now beyond
The reach of pain and death;
Not ended but begun.”