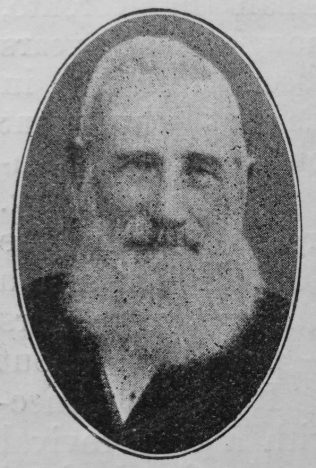 Transcription of obituary published in the Primitive Methodist Magazine by W. Robson

Alfred Wheildon, of the Cheadle Circuit, was born April 4th, 1829, and born again in 1849. Very soon he was called to preach and to lead the class at Foxt, where he then resided. On removing to Ashbourne he offered to recommence the Sunday School; his example stimulated others and a splendid harvest has been reaped at that place. His intense spirituality was evidenced by his devotion to the Class Meeting and by his preaching, which was often accompanied with great power and fruitful in conversions. He was fond of special services and Camp Meetings.

A strong Temperance man, industrious, and living an active, simple life he was deservedly popular. Twice he served as delegate to District Meeting and once to Conference. About two years ago his wife was called to the higher service and he never rallied from the shock of her death, and his health gradually failed. He longed to be able to reach Mow Cop Camp Meeting and to preach in every place in the circuit once more before he died, but he was twice smitten down with paralysis and on July 8th, 1907, passed away.

The funeral service, on July 11th, was conducted by the circuit minister in the little chapel at Blakele Lane and Mr. S. Mottram spoke in glowing terms of the worth of his departed friend. Bro. T. Chadwick led in prayer and then the long procession drove to Kingsley Churchyard, where the circuit minister conducted the burial service.

There is a deep sense of loss throughout the circuit which he has so long and so faithfully served; but we joy to know that he is gone to his well earned rest as well as to the greater work for which he has been preparing.