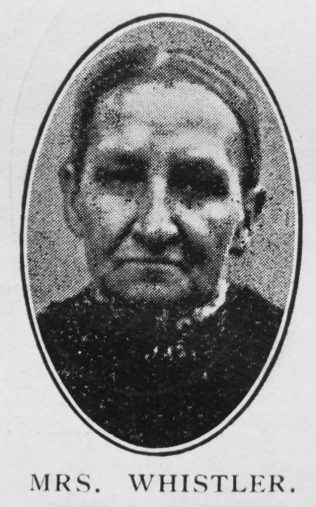 With sorrow we record the death of Mrs. Whistler, of Thetford, September 19th, 1909. For a long time she had been in failing health, but the end came suddenly. Mrs. Whistler was one of that decreasing band that worshipped at the Old Melford Common Chapel. More than fifty-three years ago she was a member of a large juvenile class then held. Through ail the intervening years, in calm or storm her love for the Church of her choice never wavered. One who knew her for many years says she was always the same, regular at ail the means of Grace when she could get there, and a good worker.

The many letters of sympathy with the  bereaved family reveal in how wide a sphere her work was done. A member of the choir, for many years she taught in the Sunday School, and led her children there. She was most hospitable and it was a positive delight to her to provide a home for the ministers and deputations. As a collector both for the Missionary Society and local needs she had a long record. She also did a great amount of visiting, principally amongst those who went to no place of worship. Unwearying in her endeavours to secure the happiness and well-being of her children, her prayer was always that they might be the Lord’s.

One who ministered in Thetford writes: “Looking back, as I am able, through a great number of years, and calling up her manifold kinds of work, her steadfastness, her loyalty and hospitality, her invariable kindness to minister and people, I see a life full of good works which testified to her faith in Christ, and her love to His Church.” Another who ministered many years later pays his tribute “to her kind nature and unobtrusive goodness.”

Her husband, a local preacher of many years’ standing, together with three daughters, are left to mourn her loss. May God bless them with all grace and consolation.

Susan was born in late 1842 at Thetford, Norfolk, to parents John, a shoe maker, and Harriet.

Before her marriage, Susan worked as a dressmaker (1861).