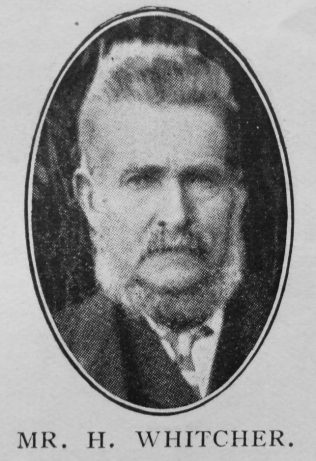 Transcription of obituary published in the Primitive Methodist Magazine by J. Miles Johnson

Brother Henry Whitcher was born at Sutton Scotney, in the Micheldever Circuit, on the 11th of April, 1838, and resided there all his life. He was converted under the Rev. Geo. Obern forty-eight years ago, and soon began to exercise his gifts in Christ’s service. He was one of the trio that started the Sunday School in the village, the sessions of which were held in his cottage. He also became a local preacher, and rendered useful service in that capacity ungrudginegly.

As a Trustee he took an interest in the mutual affairs of the Society, but took special delight in the class and prayer meetings. If only two or three were present he was there, and always in good time. latterly, when increasing years forbade his taking long journeys, he undertook the duties of doorkeeper, meeting all comers with a welcome smile and handshake, providing hymn books for those who had none.

He loved God’s House, its services were always attractive to him, and with much heartiness he joined in the service of praise, ‘‘I lift my heart to Thee’’ and ‘‘I shall be satisfied when I awake in His likeness ” being favourite hymns. His religion was practical; he lived what he professed in his home and in his work. Being an agricultural labourer his wage was never great, yet he gave with liberal hand, and reared a large family respectably. He knew what sorrow was, but through all was sustained by the Grace of God.

During the last few days of life he suffered much, but his testimony was bright and clear, and his faith unwavering. On the 19th of September, 1909, he passed through the Valley of the Shadows into the Eternal Light.

Henry was born on 11 April 1837 at Sutton Scotney, Hampshire, to parents James, who worked the land, and Harriet. He was baptised on 7 May 1837 at Wonston, Hampshire.

Note: Birth and baptism records identify that Henry was born in 1837, not 1838 at recorded in the obituary.