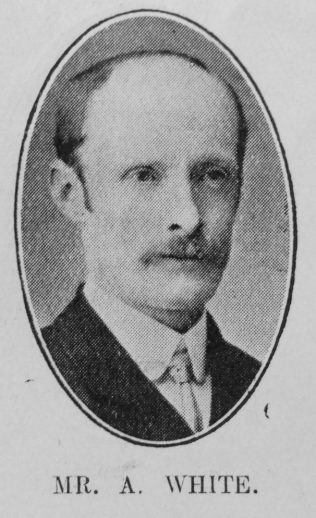 Transcription of Obituary published in the Primitive Methodist Magazine by A. Beavan

The Ossett Circuit, and Queen Street Church especially, has sustained a great loss by the tragically sudden death of Brother Allan White, November 23rd, 1908. On the previous evening, returning from the service at Queen Street, he sustained a terrible fall, causing concussion of the brain, and though medical aid was speedily obtained he never regained consciousness, and on the following morning breathed his last, within a few days of his forty-second birthday.

Born in Ossett, November, 1866, on February 13th, 1882, he entered into the joy of God’s salvation and identified himself with our Church. Recognising that he possessed both the gifts and graces essential in a preacher of the Gospel, he was authorised in 1888 to accompany the late Mr. Charlesworth to his appointments, with a view to becoming a local preacher, a position which he sustained with much acceptance to the circuit for nearly twenty years.

In the Sabbath School he rendered valuable service, and only a short time before his death was the happy recipient of the “Diploma of Honour,” given to those who had served in this important sphere of toil for twenty-five years and upwards. He was also a valued trustee of Queen Street Church and a member of the choir. Indeed, there was no department of our work in which he did not share.

His presence in a religious service or a business meeting was ever welcome, for he carried kindness and sunshine wherever he went. A lover of peace he rejoiced in the prosperity of Zion. A good man whose life was without reproach, for long years to come his name and work will remain a fragrant and inspiring memory.

All that earth could claim of him we laid to rest in the Wesleyan Cemetery, South Ossett. His funeral, conducted by the writer and Mr. Henry Westwood, J.P., was largely attended.

For the grief-stricken widow and sorrowing relatives the deepest sympathy is felt. But “We sorrow not as those which have no hope.”

Allen was born in November 1866 at Ossett, Yorkshire, to parents William, a rag grinder (1871), and Alice. He was baptised on 3 November 1867 at Holy and Undivided Trinity, Ossett and Gawthorpe.