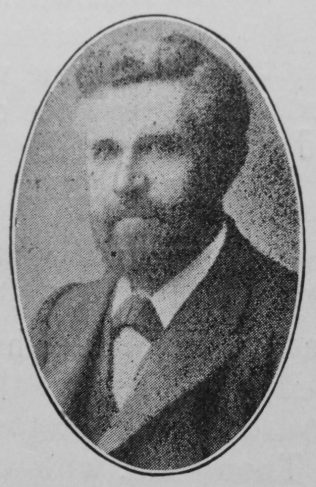 Transcription of obituary published in the Primitive Methodist Magazine by A.J. Bull

After a long and painful illness Mr. Geo. White, of Bournemouth, entered into rest, May 1st, 1908. Born at Salisbury, fifty-four years ago, when a youth he dedicated himself to Christ. His connection with Bournemouth Circuit dates back over thirty years, and he had been connected with Commercial Road Church ever since it was opened twenty-seven years ago.

During the whole of the twenty seven years he occupied the post of organist, and to mark the appreciation of his long and valuable services in that capacity he was presented with a large life-like portrait of himself in oils. He had a kind, brotherly heart, and nothing gave him greater pleasure than the society of Christian people

He had a successful business career, and his generosity was manifested in quiet ways, as well as in his public gifts to the circuit. He was a good appreciative hearer of sermons, and invariably stayed to the Sunday evening prayer meeting.

Our brother was treasurer of Commercial Road and Branksome Trusts, and a trustee for several other chapels. He was also President of Commercial Road C.E. Society, junior circuit steward, treasurer of the Salisbury and Southampton District Furnishing Fund, had been delegate to District Meeting and Conference, and for some time had occupied a seat on the Winton Urban District Council before its incorporation with the Borough of Bournemouth.

The interment took place on Tuesday, May 5th, in Wimborne Road Cemetery. The former part of the service was held in Commercial Road Church. The Revs. J. Turley, G. Standing, A. Ward, J. Wellings, A.J. Bull, and Mr. J. Watts took part. At the graveside a still larger congregation assembled.

The committal portion was read by the writer, and the Rev. J. Turley and Mr. Corbin Harris (senior circuit steward) gave brief addresses.

The number of tender and sympathetic letters received by Mrs. White and family in addition to many beautiful floral tributes were evident tokens of the high esteem in which our departed friend was held.

The following Sunday evening, in Commercial Road Church, an impressive memorial service was conducted by the Rev. A.J. Bull.

George was born abt 1854 at Salisbury, Wiltshire. I have not been able to unambiguously identify his parents in online records. can anyone point me in the right direction?

He married Agnes Elizabeth Waller (b1863) in late 1892 in the Christchurch Registration District, Hampshire.

George died on 1 May 1908 at Winton, Bournemouth, Hampshire.