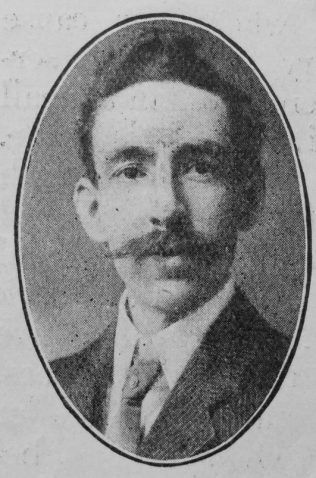 Mr. John White was born at  Houghton-le-Spring, where, while young, he was left an orphan. He was early brought into saving knowledge of Jesus Christ and at once engaged in various forms of Christian service. At eighteen he passed preliminary examination as candidate for our Ministry, but successive attacks of influenza resulted in such weakness that all hopes in this direction were abandoned, and his more than ordinary abilities had to be turned into another channel.

Having qualified as an accountant, about eight years ago business brought him to Torquay. He at once identified himself with our Church, and the Circuit soon showed appreciation of his high character and abilities, by making him Circuit Steward, while for some time he held the position of Devon and Cornwall Local Preachers’ Training Committee Secretary.

Another severe attack of influenza in December, 1906, was the beginning of the end. His brave and gentle spirit bore up through all his weakness and suffering without a word of repining and his confidence in Christ was never clouded. His addresses and sermons were always chaste and forceful; his services as Circuit Steward were marked by tact and good sense, and his bright and sunny disposition endeared him to all.

In June, 1907, he left Torquay for Houghton-le-Spring. It was hoped the rest and change would benefit him, but on October 31st, 1907, at the early age of thirty years, “he was not, for God took him.” The funeral service was largely attended, Revs. Joseph Tweddle and J.W. Hutler officiating, Mr. J. Foster, an old and intimate friend, giving an address. A memorial Service was held at Torquay the following Sunday evening, conducted by Rev. J.T. Evans and Rev. J.S. Stanwell. Our sympathies go out to his sister, uncle and aunt in the sore loss they have sustained.

John was born in 1877 at Houghton-le-Spring, Co. Durham, to parents John White and Martha Brown. His father died in a pit accident in 1877 and his mother died in 1881.