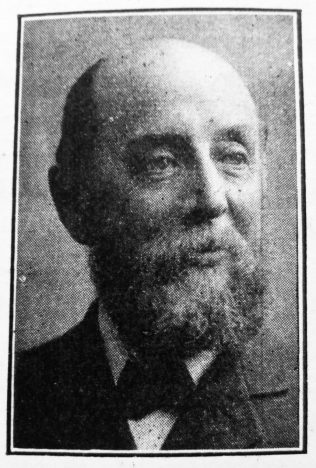 Transcription of Obituary in the Primitive Methodist Magazine by W. Lawrence

Halifax 1st Circuit and Bradford and Halifax District have sustained a heavy loss by the premature and somewhat sudden death of Mr. John Whittaker, the principal of the firm of John Whittaker and Sons, biscuit manufacturers. Mr. Whittaker was born at Burnley on May 3rd, 1847. His parents came to reside in Halifax when he was quite young, so that he received his education and business training in this town. The children were sent to Ebenezer Sunday School , and led by their parents to the services of our Church. Mr. Whittaker often spoke of the religious influence which his father exerted over him, and of the hymns which he sang to his children in the formative period of their lives.

Our brother practically, grew up under the helpful and inspiring influence of Ebenezer Church and Sunday School. He was received into the fellowship of the Church when he was seventeen years of age. He was authorised by the September Quarterly Meeting, 1865, to accompany Mr. W. Doughty to his appointments, and take part in the services, and was received as an accredited local preacher by the March Quarterly Meeting, 1868.

On April 7th, 1867, he was united in matrimony with Mary Ann Halliday, a scholar and teacher in our Sunday School and a member of our Church. The union has been an exceedingly happy one. Mrs. Whittaker has been to him a true helpmeet, sharing with him the burdens and cares of domestic and business life. These cares have neither been few nor small. They have brought up a family of nine children, three sons and six daughters who are a credit to their parentage, and workers in our Church. By their united energy and enterprise they have built up the largest biscuit manufactory in the county. But business never interfered with our brother’s religious duties. Success in material things did not wean his affections from the House of God. He loved our Zion, with a strong, passionate, manly love. He has served the varied interests of our Church faithfully and well, as a trustee, a Sunday School teacher, superintendent, society steward, circuit steward, and treasurer of the Trust estate. Our Church has reposed in him the fullest confidence and conferred upon him the highest honours within her power. He has on two occasions been elected delegate to the District Meetings, and on more than one occasion he has represented the District Committee in that court. He was a delegate to the Norwich Conference in 1892, and to the Conference at Newcastle-on-Tyne in 1903. For many years he has been a member of the District Committee, and during the past two years he has held the office of district treasurer to the Orphanage.

Mr. Whittaker was a self made man; a man of striking individuality. He thought for himself, and had the courage of his convictions.

He was a Liberal in politics, a Passive Resister, who took joyfully the spoiling of his goods rather than submit to the Education Act. He hated priestcraft. He was the treasurer of the Citizens’ League. He was a plain, practical, earnest preacher of the Gospel with the gift of ready utterance and apt illustration. His services were in great demand, especially in our village churches. Testimonies have come to hand, not merely of the acceptability of the service rendered, but of the spiritual results. The last visit he paid to Greetland, where he had frequently preached for forty years, was crowned with the salvation of one soul.

The Rev. J. Shaw says: “He was a true Christian, a staunch and liberal Primitive Methodist and a faithful friend.”

Rev. W. H. Matthews:  “I admired his convictions, his courage, earnestness and loyalty to his own church. He found his greatest joy in the service of his Lord.”

Rev. G.W. King: “He was jealous for the Church of his choice and served that Church with only his best.”

The Rev. W. Welford: “I am only one of many who revered him as a great, because a good man in our Israel; one of the makers of Primitive Methodism in the West Riding of Yorkshire.”

The Rev. A. Baldwin,  a former minister of the circuit, says: “it is quite twenty years since I made Mr. Whittaker’s acquaintance. There was much in his character that I admired; his sincerity, his evangelistic fervour, his devotion to Christ, his loyalty to our Church, his love of preaching, his ceaseless activity for all that pertained to the interests of the Kingdom of Christ, made him a prince in our Israel.”

For some time past there has been an evident mellowing of the character of our friend, and an enrichment of his experience. Grace was preparing him for the approaching change, and when it came he was ready.

He left his home on Saturday, September 30th, to preach at Keld in Swaledale, not then in the best of health, but preached on Sunday, and attended a Harvest Festival at Richmond on Monday and spoke at the public meeting. This proved to be his last work on earth.

After a long, cold drive in an open conveyance to his friend’s home, Mr. Thompson, of Round Hill, Hackforth, he completely collapsed, pneumonia set in, and bronchitis with other complications supervened, and on the morning of October 14th, God caught his spirit up into the rapture of the skies.

The interment took place on October 17th. A large number of ministers and friends, with representatives of local institutions gathered to pay their last token of respect to one whom they highly esteemed.

A most impressive memorial service, largely attended, was conducted by the writer in Ebenezer Church on Sunday morning, October 22nd.

We mourn our loss, but rejoice in his gain. We magnify the grace of God which was given him, not in vain, and we pray that the family may be Divinely comforted and sustained.

John was born to parents John, a baker, and Elizabeth.

Note: Some records spell the surname with one t.