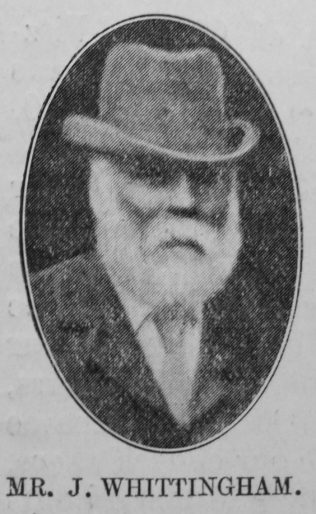 Transcription of Obituary published in the Primitive Methodist Magazine by W. Hall

John Whittingham (Market Drayton Circuit) was born at Corra, Salop, May 24th, 1838. He was converted to God in Ightfield Heath Chapel, November, 1869, at revival services, conducted by the Rev. J.R. Taylor. He became a local preacher in the year 1870, which position he occupied with great credit to himself until he fell asleep in Jesus, July 12th, 1908.

Brother Whittingham was a man who possessed sterling qualities, which were fully evinced throughout his Christian life. His religion was no cunningly devised fable, but a blessed reality, permeating his whole life.

As a local preacher he cheerfully took a good share of appointments, trudged hundreds of miles in all weathers to preach the Gospel of Christ, which he invariably delivered with much spiritual power.

As to the results of his faithful service—God alone has the record, and from Him he has obtained his title to eternal life, and has entered through the pearly gates into the New Jerusalem. May we all meet him there.

John followed his father’s trade as a carpenter and joiner