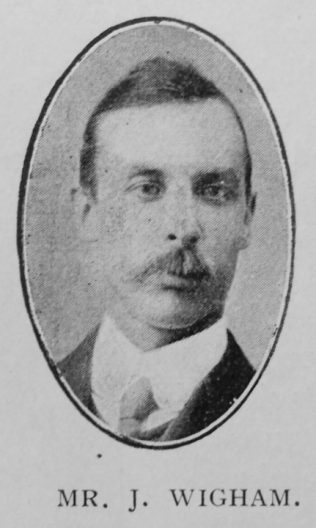 The Lemington-on-Tyne Society has sustained a great loss in the death of Mr. John Wigham, a man who has endeared himself to the members of the Church by many years of faithful and devoted service.

His chief work was seen in the efficient way he discharged the duties of secretary to the trustees, an office he held with distinction for many years. He had the genius for organising, he was always constructing some new scheme or completing others for the welfare of the Church. During the last four or five years of office he was a great sufferer from a wasting disease, yet he never ceased to have the deepest interest in the Church. He was actively associated with the Sunday School and the Christian Endeavour.

He was a man of quiet ways, unobtrusive, yet full of energy and strong purpose. A strong temperance advocate, he took a deep interest in the social and political life of the village. Previous to the interment in the Lemington Cemetery, a largely attended service was held in our Church, conducted by the Revs. T.J. Watson, T. Barnes, and E. Campbell. He passed from us in early manhood, being only thirty-four years of age at his death, but “He lives long who lives well.”

John was born in the summer of 1876 at Lumley Sixth Pit, Chester le Street, Co. Durham, to parents John Wigham, a coal miner, and Margaret Tulip.