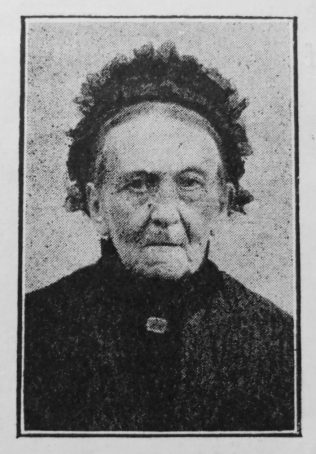 Transcription of Obituary in the Primitive Methodist Magazine by F.W.W.

Ann Louisa Wilkinson (widow of the late Rev. John Wilkinson, and mother of the Rev. F.W. Wilkinson, of Dunstable), one of the oldest members of the Hinckley Circuit, passed away at Barwell, on Saturday, March 2nd, 1907, in the  eighty-second year of her age.

She was the youngest daughter of George and Sarah Dudley, and was born at Burbage, Leicestershire, in 1825. In her youthful days, her mother’s house was the home for the preachers, and thus she came in contact with many of the older ministers. She formed one of the company that missioned Hinckley, and used to delight in telling the story how the women protected the preachers.

In 1848 she was married to the Rev. John Wilkinson, and came into close association with the ministers of the Nottingham District. She was also personally acquainted with Hugh Bourne and George Lamb, and would tell many stories concerning the former.

She travelled with her husband on the following circuits, Earl Shilton, Bottesford, Melton Mowbray, Chesterfield, Winster, Nottingham Ist, Leicester 2nd, Sleaford, Newark, Burton-on-Trent, Wirksworth and Hinckley. At the latter place her husband passed away in 1867, leaving her with four children to support and educate, three of whom survive her.

In demeanour she was quiet and thoughtful. In class meeting her testimony was clear and simple. Her kindly deeds were many, and her charity to aged persons frequent, but she believed in not letting her left hand know what her right hand did. It was in the home life that she shone brightest. The Bible was her constant companion, and its well thumbed pages bear eloquent testimony to its use. Her memory for Scripture was marvellous, and her knowledge of the contents of the Bible extensive.

During the later years of her life she was not able to leave her home for the means of grace, but it was a joy to her to hear of the progress of the cause of God.

She ascended with a happy confidence in her Saviour. It was like a tired child going to sleep to awake to the dawn of heaven.

Her body was carried to the grave at Hinckley Cemetery by four of our members, and laid to rest with that of her husband, the Rev. M. Knowlson conducting the service.

Ann was baptised on 12 March 1826 at Burbage, Leicestershire. Her parents were George, a framework knitter, and Sarah.