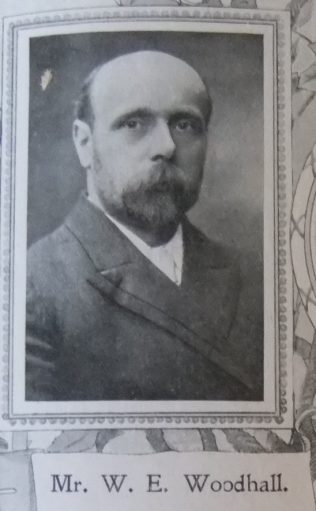 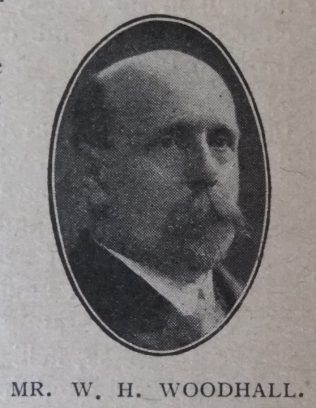 Mr. W.E. Woodhall, Circuit Steward of Liverpool I., was born in 1865. His father, Mr. Edward Woodhall, recently celebrated the Jubilee of his membership in our Church. Cradled in the Connexion, baptised in our old Rathbone Street Chapel, a scholar in the Sunday School from his third year, still a teacher of an adult Bible Class and School Treasurer for fifteen years, our Circuit Chancellor is a Primitive Methodist of the Primitive Methodists. For twenty-seven years he has been organist, and the valuable and handsome organ in Princes Avenue Church was largely the result of his tireless advocacy and generous effort. As Circuit Steward his skill in finance, his urbanity, and complete devotion to the interests of the circuit have won the respect of ministers and officials. Chairman of Toxteth Board of Guardians he is a coming man in civic life. His respected wife shares his love for the Church and his interest in its prosperity.

William was born in 1865 in Liverpool to parents Edward and Mary Jane. Edward was a grocer and baker.

William followed his father’s trade as a baker shopkeeper. In 1911, William is described as a baker and confectioner. His probate record describes him as a baker and flour dealer.

At the time of his death, William was Treasurer of Princes Avenue Church, Liverpool, having followed his father in that office. William had also been organist for forty-two years.

William served on the Board of Guardians for eighteen years, acting as Chairman for some time. For many years he was an Overseer and a Land Tax Commissioner. For eight years, William was Chairman of the Liverpool Master Bakers Association.

William died on 6 May 1921 at Liverpool, Lancashire.