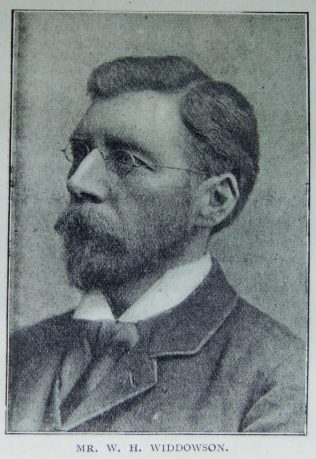 Of the redeemed, few have passed through this mortal course who led a more blameless life than did William Haslam Widdowson, the eldest son of William R. and Sarah Widdowson.

He was born at Nottingham January 28th, 1855. As a child he was remarkably healthy and robust until he was between four and five years of age, when he began to be troubled with a cough, possibly aggravated, if not caused, by the fenny district of Lincolnshire, where his father was stationed for four years. That cough ultimately developed into the disease which ended his life.

From his earliest days he was inclined to goodness, and was a loving, obedient child. In his eleventh year his father, in the course of his ministry, removed to Penrith, where a blessed revival took place, chiefly among young people, and William began to pray in the meetings, and had his name enrolled as a member of the Church.

From Penrith his parents removed to Buckingham, where he made himself useful in the Sabbath school and in other kinds of service, and while there he entered into the employment of the L. and N.W. Railway Company. In 1870 he removed, with his parents, to Watford, where he became very active in various forms of church work so that, excepting the regular ministry, there was scarcely any branch of service in our church into which he did not enter. He was a trustee of most of the chapels. He engaged in Sunday school work. He became class-leader, and society steward, and circuit steward, and local preacher. And while his whole deportment was marked by quiet thoughtfulness and order, he never entered into any work without putting his whole soul into it, so that he was generally successful in all that he undertook.

He also rendered very valuable service as secretary both of the Watford Free Church Council and the Watford and Bushey Temperance Union. For the last-named society he became secretary in 1875, and continued the work with great success until 1895, when he gave it up, under the imperative order of his medical advisers. During that twenty years the temperance cause made very great advancement in Watford and the neighbourhood. In 1895 Dr. F.R. Lees was the president, and a testimonial was given to him at the public meeting held for that purpose, and which was addressed by many of the leading temperance men of the kingdom. Dr. Lees, through the Honourable Holland Hibbert, the chairman, presented to Mr. Widdowson a complete copy of his select works in 12 vols., in one of which was the following inscription: “Presented to Mr. W.H. Widdowson, the incomparable secretary of the Watford District Temperance Union, by the author, as a mark of his esteem and affection, March 15th, 1895.”

Rev. W. Holland writes:- “My acquaintance with the late Mr. Widdowson was somewhat intimate, and extended to a period of twenty years. I knew something of his inner and outer life – his home and his church life. I knew him as a Christian man, as host, as guest, and as a correspondent. I knew him as the most ardent and untiring temperance worker I ever knew. I knew him as a church official both in Circuit and in district courts, where his knowledge of Connexional rule and usages, and his quick and clear mind and his fearless speech gave him position and power. I knew him in his last long and severe sufferings, which were born with great fortitude and true submission. My last visit to him was a few days before, weary and worn out, nature fell asleep. My knowledge of him warrants my saying that he lived the life and died the death of the righteous, and left behind for his sorrowing family a heritage of good influence. May they all follow, and overtake him in the great ‘Homeland.’”

The Rev. Harvey Roe writes:- “I enjoyed close and intimate acquaintance with the late Mr. Widdowson for over seven years, and keenly felt the loss of my dear friend when he entered the pearly gates into his eternal rest. Still I rejoice to think he is not lost, nay, we shall meet again.

“Mr. Widdowson, as an office-bearer in the church, was one of the finest officials I have ever been associated with. Intelligent, with a complete mastery of Connexional rule, he was patient, just, and generous, an able debater, but always fair to an opponent, and would never take advantage of ignorance. Hence he was a tower of strength in any meeting. As a friend he was as true as steel, and a most agreeable companion and wise adviser. As a Christian his life was most exemplary and true, Only those who came in close contact with him realised to what extent he possessed the graces of patience, cheerfulness, and simple trust in Christ.”

Through the advice of a medical specialist he removed to Torquay, where they appointed him to be their Circuit steward, which office he held until his translation to the higher service of heaven.

Rev. R. Andrews says:- “During the last six weeks since I have resided at Torquay, I have taken every opportunity possible to visit Mr. Widdowson during his illness. His sufferings at periods were intense and distressing, and one could but long for the release which should bring him to the land where there is no more pain. I found his religious experience to be a calm resting on the love of God, and a humble waiting for His will to be done. Nothing demonstrative, but rest and patience. During our seasons of devotion his broken but fervent ‘Amens’ told us upon whose strength he was leaning in his distress.

It will not be out of place for one to mention his earnest desire to see and consult the Twentieth Century Testament. Having one of my own, I took it to him, and I found his first thought was to turn to John xiv., 1-4. This new version gave him much pleasure and much comfort, and his conversation thereon, both to myself and others, showed the trend of his soul was to the day of his Homecoming. He also retained, to the very last period of consciousness, a deep interest In the church here, and in the Connexion at large, and of the temperance cause, and was full of enquiries as to the movements of the religious world. During the last few days he would read certain articles on temperance which were appearing in one of the papers, and when he found that papers were about to be removed, he feebly signified that it should be left, for he had not quite mastered it yet. It may truly be said that the work of God and the Church held him until the last. I find that although my officials have known him less than two years, they had formed a profound admiration for his grace and gifts, and realised that, if God had spared him, he would have been an acquisition to the religious life of the church and the town at large.”

Mr. Mountstephen, one of our Torquay members, who kindly sat with him during several of the last nights of his life, says:- ‘‘About five weeks ago, when he had taken a turn for the worse, a friend came to see him, who, as he took his hand, asked him how it was with him. He replied: ‘The only message I have for you is, Jesus is the same to me now as He was the day He saved me.’ Another time, not knowing that I was in the room, he said, ‘I know Whom I have believed, and am persuaded that He is able to keep that which I have committed unto Him against that day.’ On several occasions he said, ‘Blessed Jesus, Thou art precious to me.’ One night, when suffering very much, he said, ‘ Oh, Lord Jesus, come now, and take me home,’ but as soon as he had gained sufficient strength he said, ‘I am willing to wait until the Lord’s will is perfectly fulfilled in me.’ He was constantly expressing his confidence in Christ.”

The first part of the funeral service was conducted in our Torquay Chapel, and then his remains were laid in the Torquay Cemetery, the Revs. R. Andrews and W. Holland officiating.

Besides friends and the other relations of his family, he has left a widow and five children to mourn his loss, but to the last he frequently expressed his confident belief that his Heavenly Father would take care of them, and be to them all they might need. May they all follow in his steps.

On Sunday evening, September 14th, a memorial service was held in Queen’s Road Church, Watford, when an impressive discourse was delivered by Rev. H. G. Button, who, after speaking of the life and labours of the beloved brother who had passed away, referred to the valuable assistance he had received from him during the four years of his former superintendency of the Watford station, and showed that by his Christian character, consistent conduct, deep devotion, arduous labours, and constant fidelity in the work of God he had left a noble example which it was hoped many would emulate.

William worked as a railway clerk. He married Elizabeth Maile (abt1855-1947) in the summer of 1879 at Watford, Hertfordshire. Census returns identify four children.