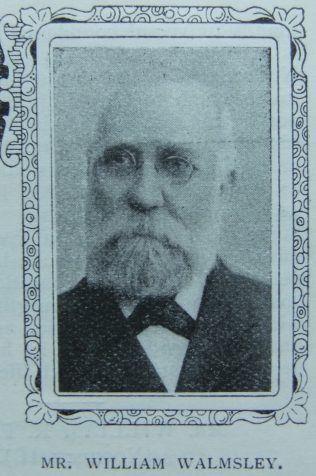 Born at Warrington, Sept. 3rd, 1842, Mr William Walmsley removed with his parents to Manchester, when he was only two years of age. He attended our Jersey Street Sunday school, and afterwards that in Cobden Street, now Bradford Road, and still treasures a specimen of the handbill he delivered announcing the opening of the latter. His conversion took place in 1857, under the famous evangelist, James Caughey, in the United Methodist Free Church, Ancoats. Joining the society of which the late Mr. John Longdin was leader, within two years he became assistant secretary of the school and afterwards secretary, an office he held for many years. For fourteen years he was assistant superintendent, and for a like period superintendent of the school. He became a local preacher in 1863, and preached extensively when Circuits were large. For many years he was the leader of a large class, and has held also the offices of society steward and Circuit steward. He has been a delegate to district meeting, and is a trustee and secretary of our Bradford Road Church. His long valued service in connection with this Church was recognised by the presentation of an illuminated address. Though past the meridian of life his heart is still young, his voice as clear as a bell, and his outlook bright and hopeful. He has filled a large place in the life of the Church with which he has been so long and honourably associated, and we pray that he may yet see many days of blessing before the coming of the chariots of the Lord.

William was born at Warrington to parents Thomas and Elizabeth. William’s marriage certificate records that Thomas was a file cutter.