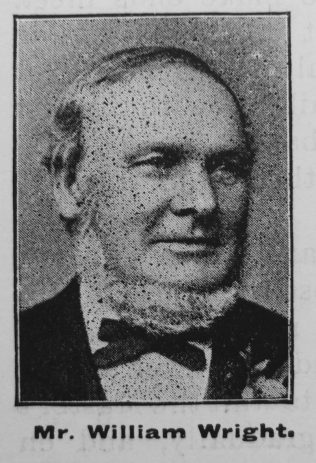 Transcription of Obituary in the Primitive Methodist Magazine by H.J. Taylor

The Southport second circuit and the Cemetery Road society in particular have lost a most valuable member and worker in the death, at the age of 71, of William Wright, of Windsor Road. He was born near, if not actually on the site where our Derby Road Church now stands; he never lived more than half-a-mile away, and but for short holidays, was seldom out of town: and perhaps for the last half century there has not been a day when he has not done a little, in one way or another, for our Church in Southport.

He filled several offices, but is chiefly remembered as school superintendent, first at London Street, and later and almost until the end of his life at Cemetery Road. And it is the common testimony that few schools have had a more devoted superintendent. The children loved him as a father, and now that he has gone to his reward, hundreds of them remember his self-sacrificing life, and earnest entreaties and prayers.

Mr. Wright took a leading part in the erection of our Cemetery Road Church nine years ago and was the most generous donor. When the difficulties were many and the friends few he never despaired, never faltered or complained. He was known to be always at his post, and, in season and out of season, thinking, talking, praying, working and giving for success. The new property, now completed and worth nearly £3,000, on a fine road, with less than £600 debt, owes more to William Wright than to any other of its many friends.

During the last two or three years his health was much broken, but probably not a day passed upon which he did not think of and pray for the Church which to him was more than life or health. In all this he was admirably seconded by the dear lady, loved by all, who now mourns the loss of a most devoted husband and indulgent father. The end, anticipated for some time, came on June 17th, 1902, and all who looked on knew that he had an abundant entrance into the Father’s House. His simple child-like faith in God was all-sufficient. The church he loved so long and so well was a fitting place for the last service, and the Rev. W.R. Bird, Rev. T. Bennett, and the Rev. J. Roxby officiated in the presence of the family and many friends, and on every lip was the one expression, “he was a good man”; and it summed up his life.

William was born on 15 May 1832 at Southport, Lancashire, to parents John Wright, a fisherman, and Ann Keen. He was baptised on 17 June 1832 at he Wesleyan Methodist Chapel, Southport.

William married Elizabeth Bolton (b abt1836) in the spring of 1853 at Southport, Lancashire. Census returns identify eight children.