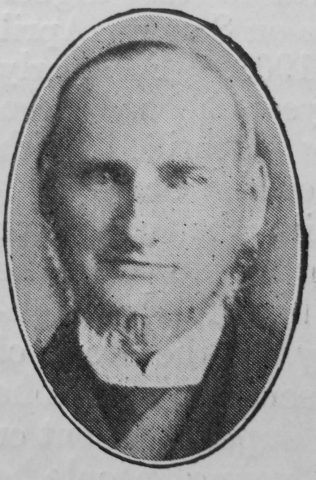 Transcription of obituary published in the Primitive Methodist Magazine by R.W. Nelson

As the Sabbath morning of March 29th, 1908, was breaking, the spirit of George F. Williams entered upon that eternal “rest that remaineth to the people of God.”

Born in the village hamlet of Eardsland, in Herefordshire, sixty-five years ago, both his parents died during his childhood. Taken by an uncle he was apprenticed to the butchering in Presteign, where at the age of seventeen his conversion took place. The reality of the wondrous  change he then experienced was soon attested by the devotion and service of his subsequent career. It is recalled that on many an occasion in those early days, he would walk for miles, thereby missing his dinner, in order to be present at the Sabbath School or prayer meeting.

Marrying, at Staunton-on-Arrow, in 1865, a lady belonging to an old Primitive Methodist family, he became through her influence loyally attached to Primitive Methodism. Possessing gifts and graces he was called to preach the gospel and soon his name appeared on the plan.

For over forty years he faithfully proclaimed the evangel of love, and his was the unspeakable joy of seeing many enter the kingdom. Always at the “means of grace” Sundays and week-days his was the fellowship that enriched. Eager and ready to serve, radiant in heart and full of high hope he was greatly beloved.

A striking. tribute was borne him on the day of the funeral, when most of the tradesmen walked in procession to the church where the writer conducted a short service, the Rev. W. Marwood giving an address.

On April 12th the “In Memoriam” service was held, the church being crowded. The Rev. R.W. Nelson gave the address.

Deeply his departure is mourned by a large family and by all the churches. Yet grief is tempered by the thought that our loss is his gain, and that “when the morning dawns and the shadows flee away we shall meet him again.”

George was born abt 1843 at Eardisland, nr Leominster, Herefordshire. he was brought up by this uncle, Thomas Hodges, a gatekeeper and farmer of 8 acres in 1851.

George was a butcher, mainly in Ludlow, before moving to Hay in the late 1880’s.

He married Ann Price (abt1844-1892) in the summer of 1865 at Staunton-on-Arrow, Herefordshire. Census returns identify eleven children.

He married Eliza Lewis (abt1841-1910) in early 1896 in the Kington Registration District, Herefordshire.