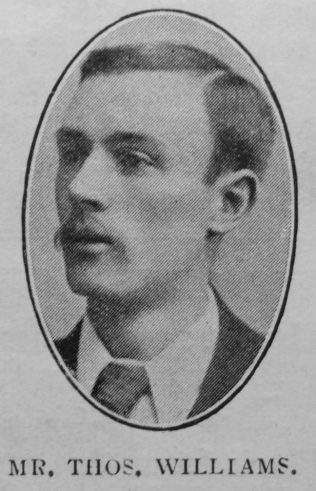 Mr. Thomas Williams, of Shotley Bridge Circuit, passed away July 14th, 1909, in his forty-third year. He was converted and joined the Church at Blackhill as a lad, consecrating all his gifts to the service of God. A clear brain, fine social sympathies, and a Welshman’s witty, mirth-provoking speech, all contributed to make him a lovable, radiant personality. He was a loyal Primitive Methodist. His religion was finely human and made of him a useful citizen.

As member of the Urban District Council, he took special interest in schemes for the better housing of the working classes. A Local Preacher for 24 years, superintendent of the Sunday School for nine years, it is difficult to realise that he was only forty-two years of age when the call came.

For six months he was laid aside from active duty. Through all his illness he maintained his cheery faith, often brightening by his sallies the visitors who came to comfort him. He wanted to live for the sake of his four children, but for himself he was ready and eager for the change. On July 17th his body was laid in Benfieldside Cemetery. Blackhill Church was crowded with the concourse of mourners as the Rev. T.J. Watson spoke of his noble character and service. Other ministers taking part in Church and Cemetery were Revs. T. Elliott, E.B. Storr, and J. Rutherford.

Thomas was born abt1867 at Consett, Co. Durham, to parents Daniel Williams, a steel plate mill foreman (1891), and Hannah Morgan.

Thomas worked in a steel mill.