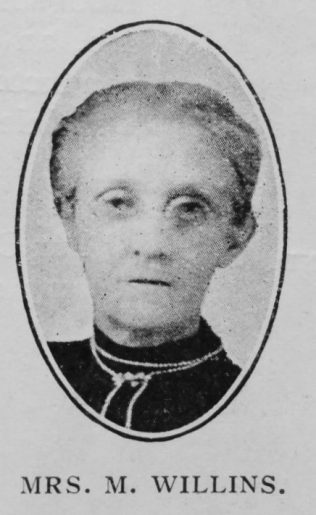 Mary Willins, wife of James Willins, of Lemington-on-Tyne, departed this life November 8th, 1911. From her infancy she had been associated with our Church. Daughter of the late Benjamin Robson, whose life story recently appeared in the “P.M. Leader,” under the title of “Benny Robson, the Billy Bray of Ludworth,” Mrs. Willins inherited many of the qualities that distinguished her father. She overflowed with quaint humour, and had the zeal and originality so characteristic of Benny Robson.

Mr. and Mrs. Willins came from Station Town in the Thornley Circuit about twenty years ago. Since her advent to this Circuit she has been conspicuous in her work and generous gifts. James Willins was a widower with one daughter and three sons when he married Mary Robson. The family grew up to love her; she was an exemplary mother in the home.

Eight years ago James Willins underwent an operation. Since that time he has been unable to follow his employment; yet the family have never reduced their contributions to the Church. Mrs. Willins’ mission in life was to help and heal. Her medicine chest was as often used for the ailments of others as for her own household. She was kind to the poor and queenly in her gifts to all good causes. She had passed away before our annual missionary meeting, but her husband sent a donation of 10/- to the fund in memory of his dear wife. He paid this saying it was what she would have done had she lived.

The funeral was largely attended by friends of her father from the Counties of Durham and Northumberland. A service was conducted in the Lemington Chapel by Joseph Trevvett, of Leeds and Rev. E. Campbell.

Mary was born abt1854 at Cassop, Co. Durham, to parents Benjamin, a coal miner, and Isabella.

Mary died on 8 November 1911 at Lexington on Tyne, Northumberland.