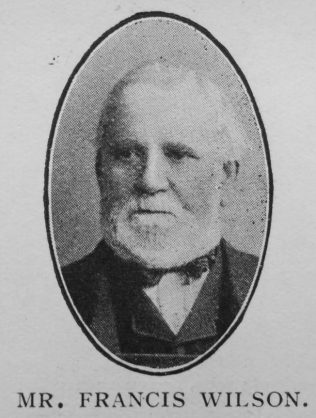 Transcription of obituary published in the Primitive Methodist Magazine by W. Shaw

On June 7th, 1910, there passed into the “Homeland” one of the truest and most steadfast of the adherents of the Primitive Methodist Church in the person of the late Mr. Francis Wilson, of Pontefract.

Converted in the prime of life through the agency of Primitive Methodism, he became a steady-going, devoted and constant “man of God.” He held the offices of Circuit Steward, Class Leader, Sunday School Superintendent for many years, and Treasurer up to the time of his decease.

Thoroughly trustworthy and honourable in all things, he was steadfast, firm and true. Quiet, unassuming, but intensely thoughtful, he was an interesting and inspiring hearer and helpful to many a preacher. The welfare of the Church was a vital matter to him. Through the generosity of Mr. Wilson the minister has carried many a blessing to the homes of the poor, at Christmas and other times.

After a long life (for he was eighty-five years old at his decease), he leaves behind him a name that is respected by those who knew him best, and a character worthy of sincere and affectionate regard.

Francis was born in 1825 at Pontefract, Yorkshire, to parents Peter Wilson, a labourer (1825), and Ann Bonner. He was baptised on 25 September 1825 at St Giles & St Mary, Pontefract

He married Ellen Hopkinson (1842-1933) in the spring of 1894 in the Knaresborough Registration District, Yorkshire.